Circling to the Pope

Some time ago Jim asked if I was interested in seeing if we could attend the public Mass when Pope Benedict came to Washington. I am not a big crowd person so had little enthusiasm about it. As it turned out with Jim's surgery and later complications the idea fell by the wayside.

Last night when we drove down to GW to the Emergency Room workmen were setting up barricades as they prepared to close the exits from Rock Creek Parkway to Pennsylvania Avene. Ah, ofcourse. The Pope's visit tomorrow. This was part of the traffic re-routing for the security plan to protect him. I had not wanted to be part of this very thing. At least we would were ahead of it. I parked in the multi-strory parking garage across from the hospital, feeling good that our car was safely out of the way.

Jim and I had a rough night.

We arrived at 9:30 pm, sent by the doctor as the safest thing for Jim who had a fever, saying it was best to get the IV antibiotics started as soon as possible. We are dealing not with a new condition but with an ongoing issue that began in this very hopsital. Well as soon as possible was two hours later. For those two hours Jim lay on a gurney in a curtained cubicle, feverish with chills. Finally blood was drawn for blood studies and the IV was started. We were told Jim was to be admitted. But, there "are no beds" "you have to wait in the ER." Fine.
a
Four hours into this wait - and Jim had not even been given a drink of water. I asked if he was ordered no food or drink, "no" so I found a drink machine and bought him an orageade and some plain animal crackers. The nurse said, "he doesn't look dehydrated" and I heard myself saying, "look, not even offering someone a drink of water shows no human kindness."

I don't think these people are cruel- they are thoughtless and as the night gets longer they lose sight of the basic human needs of people lying on gurneys waiting for treatment, tests, or admission. They are sharp for crises but over-look the human touch.

We stayed in the emergency room for 6 and a half hours.
Finally Jim was rolled upstairs to the floor at 4:30 am. Not to a regular floor but to a "holding area". We had been there before. I knew this was a basic observation ward. The nurses and tech were very caring. Once Jim was settled, I was grateful for a pillow and blanket as I prepared to sleep sitting up in a straight chair.

By 5:30 am my right leg was numb and I could hardly move so I crawled into bed with Jim and went to sleep. And that's where was when the four man urology House Staff entourage made their Rounds a little after 6 am. Oops. The really funny thing is that they seemed nt to notice that I was there. After they left I clmbed back in beside Jim for a little more sleep. When the nurse came in with a new IV she laughed. "How nice you can still snuggle." "You're right." we agreed.


When the nurse told us Jim was staying on this ward I aked if they could please bring down a cot from the 5th floor. Well, the short of it is that instead of getting a cot they found a room and Jim was moved to the Fifih floor. We walked into a room that faces 23rd Street and PennsylvaniaAvenue. A room with two windows that overlook the route planned for the Pope to travel when he leaves the White House this morning. 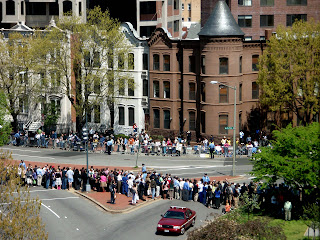 Jim could see from his bed and I pulled up a chair to watch the security preparations and then the gathering crowd. 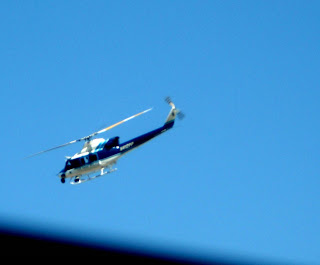 And finally.
Pope Benedict in his white Mercedes Popemobile rode right before us. 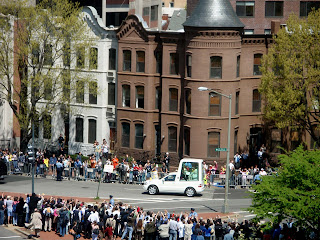 Jim was delighted. He saw the Pope after all.

And I thought the crowd would be hard.

Circling back.
Posted by ELLOUISESTORY

My prayers are with you and Jim. I know you would rather be home with a healthy Jim at your side, but God does work in mysterious ways. So glad you had just the right room.
Bety Smith

Elouise, you find the silver lining in a rusty cup! How wonderful that you got to see the pope. I hope you're out of that place soon, though. I know you'd rather be home and Jim safe and well.

I love that - finding a silver lining in a rusty cup - that's better than what my Daddy called it - "making chicken salad out of chicken S---."
My mother was a master at it.
Sometimes its all you can do.

We are home - even though Jim's not completely well yet - still running a fever and some questions unanswered - but home is good.