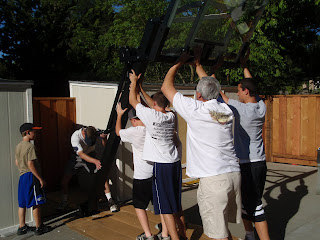 It takes a village to raise a backboard.

Excitement in the backyard yesterday.
My ringside seat for this event suited me fine. I watched through the patio doors from the comfort of the couch in the den.
For several hours it was slow going as a couple of guys assembled the framework. When they were ready they called in more hands and backs from the neighborhood. As the raised arms and hands pushed the pole upright I recognized it as a barn raising.

No, I have never seen a real barn-raising but I have seen great movie recreations.
Remember the raucous barn-raising scene in Seven Brides for Seven Brothers, the great 1950s musical. Another barnraising scene fresh in my memory is the Harrison Ford film, Witness which Jim and I saw recently on TCM.

There is a good article about our root connections to barn raising on Wikipedia.

While all that sweating was happening in the back yard I was watching "House" on the Fox Channel. There was a marathon of medical mysteries for the brilliant, eccentric Gregory House, MD to solve.

I first encountered medical mysteries at Johns Hopkins Hospital in 1954. Every Monday a paper with a puzzle was distributed - all the information to make a diagnosis. Blood work, x-ray information, etc etc etc. It was part of teaching and honing skills in differential diagnosis. Medical staff from top levels to medical students studied the clues, discussed them and cogitated over the possible answers. Students nurses also took a crack at figuring out the puzzle. Then on Fridays the answer was revealed at the Clinical Pathological Conference. Aleays complex, most always a surprise.

Now ofcourse there was not the drama of House - and no cameras - but the purpose was the same - ask questions, learn enough, save the patient.

And, often the cases were just as bizarre as those that appear on House. Hopkins is a teaching hospital. People came with the illnesses no one else was dealing with or with illness someone on the staff was researching and studying. I remember someone saying once time - "graduate medical school from here and you won't recognize measles the first time you see it."

But you will keep asking the questions - and I know from watching Jim - you're not satisfied until you get to the bottom of the problem. Part of the art of medicine.
Posted by ELLOUISESTORY