Everyone knew it was coming - ever since his operation at Stanford in March - but it happened suddenly. Jim's brother, David died Monday. Jim's doctors cleared him for the trip so here we are in Sunny California.

We flew out yesterday and drove down with Robin today. Our usual routte - the 580 to Highway 99 - is a boring drive but its a very familiar ride through rolling hills to the flat farmlands and smallish towns and almond orchards of the San Joacquin Valley. It was sunny but there was too much haze to see the Sierras in the distance, That's OK. I had gotten a really good look at those craggy mountain tops as we flew over. 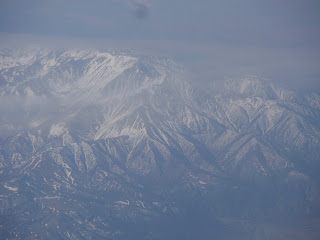 We passed Modesto, Merced, old Castle Air Force Base and Chowchilla before we reached Madera, Jim's home town. After 53 years it holds many memories for me too.

We always stay in town at the Madera Valley Inn but this time we booked rooms at the Holiday Inn Express on the edge of town. Jim's older brother likes to stay here because its new and he says he doesn't hear the train.

There must be something amiss with his hearing - you can't take a step in this town without hearing a train. True its not as close so I miss the rattling and shaking as one of those long, long trains that brings traffic to a stop all through the town rolls by at the corner of our hotel room at the Madera Valley Inn.
Posted by ELLOUISESTORY

I'm so sorry, Ellouise. Even when expected, it's difficult to lose a loved family member. Give Jim my best and a hug. You two were strongly on my mind the past two days, and I wanted to call you. Now I know why.