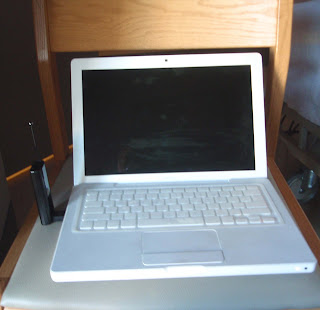 I love this computer and my new broad band plug in. Surf, surf, surf. Email, blogs-read and write and a way to watch out for yourself. Jim and I spent one evening surfing for articles about the procedure the doctors planned for him for the next day. And having it helps to fill the minutes and hours that hang heavy on your hands when you are just sitting and waiting.

This time I brought Net Flix movies so Jim and I could choose our own entertainment and we watched them on the computer. Once you're in a hospital and strangers think they are in charge of you and your body it becomes important to make some indepedent choices just to hang on to your sense of yourself. Watching on the computer has several advantages - watching on a tiny screen - you're distanced from the violence in The Last King of Scotland and "pausing" takes care of interruptions without losing the thread of the movie. That's OK. Tests your memory. If you forget you can review a few scenes. Would you believe it took us five hours to complete a two hour movie?

Jim was visited by a member of the Pastoral Staff who is a Methodist minister. "Ellouise is a Metholic" Jim tells her." Then we explained that I had been Artist in Residence at Foundry United Methodist Church in Washingotn. I was sent there on a grant from Wesley Seminary. Isn't it great that I am a Catholic but art is ecumenical. For a year I went to Mass on Saturday evening and Church services twice on Sunday at Foundry. The ministers and the congregaton were great. Being at Foundry Church was a Grace that continues to enrich my life.

It turns out that this woman was a graduate of Wesley, had attended Foundry and we knew people in common. Another bit of small world connecting. She asked me if I knew that Catherine Kapikian, the artist who developed and directs the liturgical art programs at
Wesley and is the person who assigned me to Foundry, had designed the chapel here at George Washington Hospital. No, I did not know that so later I went to see it.

The Chapel is small and inviting - a calming meditative space. 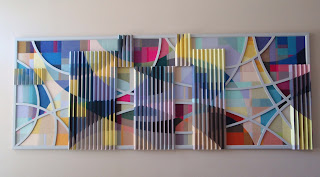 A central element is this large art work by Catherine Kapikian, which suggests a stained glass window. The background on the wood panel of patched suede-like fabrics softens the thoroughly modern abstract composition. The non-denominational "sanctuary space" is a gift to patients and families from the Women's Guild of George Washington University Hospital. Trust women to recognize the need.

Jim and I also spent some time with a bit of personal circling.

Our view from the windows in Room 552 over-looked the backside of 2440 Pennsylvania Avenue. Now it is the Melrose Hotel but in 1970 it was an office/apartment building. When Jim opened his private practice in DC his office was on the first floor of 2440 PA Avenue. He knew all the tradespeople, walked to GW Hospital for meetings, to teach, to see patients, and spent long days in his office. This was his world, his neighborhood for seven years. 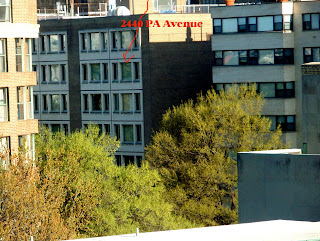