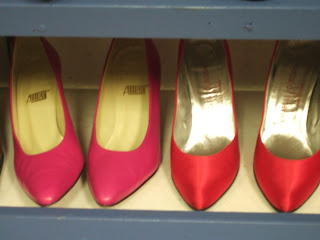 When we were living in Chapel Hill, NC in the 1960s I took a UNC evening college Creative Writing course with NC author, Manly Wade Wellman. He was an interesting guy and a good critic. He called himself a "hack" writer. I later learned that he had a bevy of books on many subjects to his credit. Today I would call him a "journey man" writer - someone doing what they love for their full time occupation.

I remember a story I wrote in that class about a red dress I had when we were living in Brooklyn, NY. It opened with a line, " When she was afraid she wore the red dress and it gave her courage." or something like that. Mr. Wellman underlined the line and wrote "good and true" in the margin. I was thrilled he thought it was good because I knew it was true.

Well, I wish I had that dress these days or at least a pair of red shoes.

The other morning without either my red dress or any red shoes handy I pulled on red socks as I quickly dressed to take Jim downtown to the George Washington Univerity Hospital emergency room. 4:30 am little or no traffic held us up and we made the half hour trip in 15 minutes.

Wouldn't you know, a post-op complication - that had taken two weeks to manifest. When we were in NC visiting Mama Jim began to spike a fever. The came the shaking chills. He put himself on an antibiotic to get some treatment started until we got home and his surgeon.

Once at the hopsital we sat and sat as a dozen doctors came and went in his treatment room before finally, "we are going to admit you for observation." During the day that changed frequently to, " the ct-scan shows a collection of fluid so we are going to aspirate the fluid under Interventional Radiology, to doing it, to "you will be here two or three days."

So here we are again. His surgery was March 14, we are back on the same hospital floor with the same nurses and staff and attended by the same residents who were part of his surgical team. Familiarity is good -

And what you ask am I doing all this time? Just like always - WATCHING!

This time I caught a mistake that could have really been hurtful for Jim. The in-take doctor did not order a complete list of Jim's heart meds and not getting the regular dose of one of them would have been a dangerous risk for Jim. Jim would have caught it himself except that he was still "out" from the anesthesia they had to use for his procedure.

It's important to have a watcher.

But if you are the watcher get ready - they will dub you a bitch, give you a dirty look and and walk away mad.

And will you care?
Posted by ELLOUISESTORY

You are no b*tch. Well, maybe only in the sense of fiercely gaurading your own.

I'm sure Jim thinks of you as his guardian angel. And when (and if) the person who made the mistake ever admits that they did, they too will be grateful for your vigilence.

My sister went through the same thing, in depth, when her husband was burned. She was there every day, as long as it was physically possible. And she caught many, many errors that could have cost Roger his life. Her sense of herself took a beating because of the way staff looked at her. But he survived. She was like a she-cat protecting her young.

You're doing the right thing. You love him--to them he's just another patient. You will care--they will follow orders, sometimes carelessly. Sometimes it's not their fault--another sister is a nurse and she tells me about the understaffing, the long, long hours on her feet, the tiredness, and the patients who can wear her to the gorund with petty requests while those with serious needs are silent. It's not easy on either side, unfortunately.

Stay with it, Ellouise! Your Jim is a precious guy.