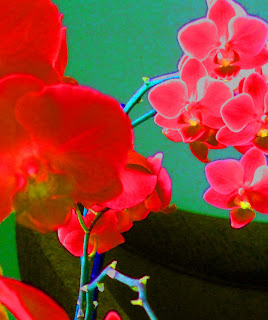 Playing with color satisfies me; lifts my spirits. Flower forms are useful subjects for these color antics. In real life these orchids were originally a deep pink. Don't you love the surprise of the blue stems.

2. Watching the American Experience documentary The Kennedys on PBS tonight - appreciating their mythic story and reliving my own memories of those years. Walter Cronkite's tears when he announced John F. Kennedy's death always brings me to tears as I recall the tears I shed when I watched him say those words on that November day. We lived in Chapel Hill, NC where Jim was in his Residency at NC Memorial Hospital. I was ironing, watching my daily soap operas as my little children played near-by. They broke into the program and there was Walter Cronkite in his shirt sleeves talking about Dallas. That is a "passage" moment - where were you that day? 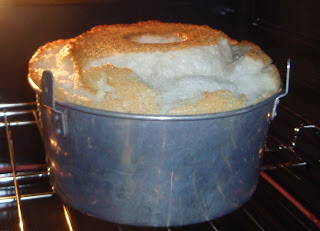 3. The sweet smell of a cake baking in the oven adds such a homey feeling to the kitchen. Tonight when I was overcome by a domestic urge I took out a box and mixed up a cake. Angel Food cake is my favorite to make because its good and it rarely fails. Recently I have tried different brands , Duncan Hines, Betty Crocker and Safeway. This is a Betty Crocker which rises gloriously and has a great texture. It is good eating. Can you tell I could not wait so I tasted it?

Ellouise, I was in 5th or 6th grade at All Saints School in Manassas and we were having singing class all together. One of the bus drivers came in and told sister Lawrence and she told us. I think we first heard he was shot and then that he died. We fell to our knees praying. I couldn't stop crying and my nun teacher wouldn't let me leave school till I did. So I stopped till I got in the car. It was so sad. Granny Sue was probably there with me at that time. It would be interesting to hear her memory of it. Take care, Debbie