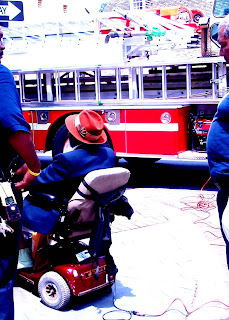 The weather was inviting as Jim and I drove to Georgetown to deliver some papers. I double-parked and hovered while he ran inside to drop them off. When Jim hopped back into the car we decided to park and have lunch. A spontaneous lunch date.

As I pulled into a parking place on 31st Street we both noticed a fire truck at the corner. Half a dozen firemen in blue were pulling something off the truck. We craned our necks to see signs of smoke. Turned out there was not a fire. The emergency was smaller and more contained. This man was stalled in his motorized wheel chair. His battery was dead. The firemen hooked his chair up to the truck by a long electric cord to charge the battery so that he could get going again. No disaster - we had happened upon a good deed.

In case you are wondering - we were not the only passers-by who stopped to take a picture of the wheel-chair rescue. 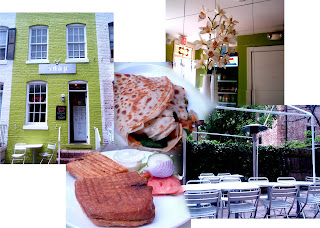 Jim and I walked a little way down 31 Street and decided on SNAP for our lunch. I was drawn in by the vivid paint-job on the building. Jim liked the names of the sandwiches.

The narrow row-house had room for a food bar and several tables. The mirrors over the mantel of the former-slim living room helped to give the illusion of a larger space. We chose the patio eating area in the back.

The menu featured crepes and pannini sandwiches - all named for their Mediterranean combinations. Jim ordered the pannini - something with chicken, feta cheese and artichoke and a bit of green salad on the plate. 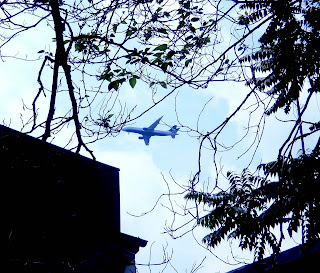 Sitting outside we were in the city. Even though we were sitting in the secluded back patio we heard the city sounds around us - cars, trucks, horns, sirens and distant pedestrian talking. Like people describe hearing the refreshing noises of the forest we soaked in the ambient noises of downtown Washington, DC.


Georgetown is on the flight path for landings at Reagan National Airport so every 3- 5 minutes there was a plane over-heard on approach for its landing.

It was good.
Posted by ELLOUISESTORY