I guess Mama started crocheting in the 1970s. At one point she decided to make an afghan for each of her children and grand-children - those on the scene at the time. It was quite an undertaking. By the time she had to give up holding a hook and yarn she had made everybody one.

But families grow as we know. So later when Diane and Elizabeth became the center of my brother's life Mama was done with her crocheting and that seemed to close that subject.

Or, so we thought.

I am a knitter, a crafty-type. When Mama was going through left-overs, she found granny squares she had made but not used. She gave them to me. That happened about twenty years ago. I brought them back to Maryland and stashed them on the top shelf of a storage closet.

You already know that I hardly ever throw anything out so they languished safely on that shelf until a few weeks ago when we had to empty closets to prepare for the carpet installers.


Surprise. Inside a large Sweet n Lo box was an old plastic bag containing Mama's crocheted granny squares. I cannot take full credit for the inspiration for their next home. I am sure this is Mama's idea and she nudged me to do it for her. 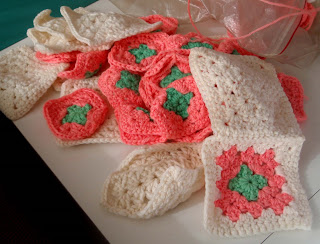 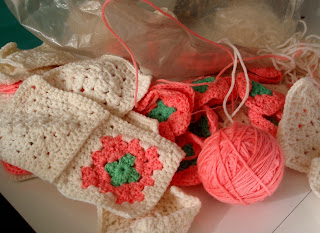 When I called Diane, "Do you think Elizabeth would want these crocheted squares Mamam made?" her answer "YES!" told the tale.

Yesterday I wrapped the box in brown paper and took it to the Kensington Post Office. Mama's hand-work is on its way to Georgia - a gift to Diane for Elizabeth. Sent with love from Mama through me.
When I told "my ladies" at the retirement home about finding the squares - about sending them to Diane and Elizabeth - that darling Nadine burst out - "Ellouise, this is so wonderful. They have a second chance - a second chance to be an heirloom."
Indeed!
Posted by ELLOUISESTORY

They are beautiful and will make a wonderful heirloom.
When I was packing to move, I decided the rug my ex had made for me ought not to come along, as the backing is undoubtedly rubber. My "Readers and Stitchers" group at the library agreed that he should have first dibs on it, and on the squares he had woven years ago, which his mother had given to me the first time we visited her in Florida. His third (and most wonderful) wife immediately found a place to hang the rug. I'm not sure what use they are making of the squares, but they are where they belong.

I sent your link to Elisabeth to read. I wanted her to be as surprised as I was by your phone call.

Last night, she and Jay were to attending their Marriage Prep class and when they arrived at the Church, no one else was there. She called in a panic and asked me to check her email to see if they had the correctdate and time. They did but they were early - 15 minutes early. In her outbox email, she had sent an note to her future MIL and her MIL five sisters that read sorta like this:

"Check out the sweet story on my Aunt Ellouise's website. I'm so excited. I miss my Mamama so much."

Clarie,my best friend in the whole world,is a fabulous crocheter and is going to put the blanket together for Elisabeth. I know that it will be proudly displayed in her home forever!

Thanks so much for thinking of us when you came across Mamama's squares. I think I need to start cleaning out my closets and see what treasures are hiding in them!