Did you see the announcement today ? Article in the Washington Post. (when you reach the Post page - search "Neil Gaiman" - that does it.

Neil Gaiman has just won the Newberry Prize for
The Graveyard Book.

I read it several months ago and loved it. But I did not tell you what led me to read it.

One afternoon when Jim and I were driving back from PA we listened to a fascinating NPR radio radio interview with author Neil Gaiman. Talking about his new book, The Graveyard Book. Gaiman told about taking his small child to a near-by graveyard to play twenty years ago and how, watching his youngster, the germ of the idea of a child being raised in a graveyard began to jell. Nobody Owens or Bod is the boy in this book who is raised by a community of ghosts.

I had to get the book into my hands as quickly as possible. It reminded me of Mama. 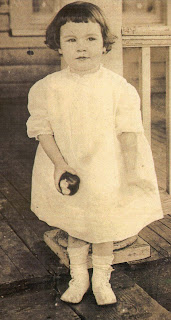 Mama had told me from my earliest memory that she was "raised in Elmwood Cometary."

Mama's daddy died when she was about 18 months old. Granny was devastated. Everyday she took Mama with her and drove to Elmwood, parked at the grave and sat with Gus Keasler - every day for eight years .

As Mama grew she was more and more restless on these long visits and Granny let her get out of the car. Mama had the run of the marble garden. She climbed over the statuary and eventually read the tombstones. She knew where everyone was buried. She could lead you right to anyone that she or Granny had known. She could tell you about them.

Several years ago our son Jim and his family went to visit Mama. She asked him to drive her out to Elmwood for a visit. Once they were parked she led them through the grounds, telling him stories, introducing all the family.

When I mentioned it to her she said - " Of course I could do that. I was raised in Elmwood Cemetery."

When reading Gaiman's book I enjoyed and admired the language, the images, and I liked the characters in the ghostly community. This book was written with adolescent readers in mind but, like Harry Potter, adults know - its for us too.
Posted by ELLOUISESTORY