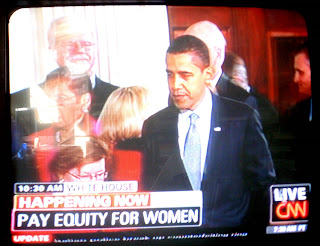 Alabama factory worker and Pay Equity advocate Lillie Ledbetter stood beside President Barack Obama today as he signed the Pay Equity Bill which is named for her.

Veteran advocate for Equal Rights for Women Senator Barbara Mikulski, (MD), wiped away tears when he handed her one of the pens he used to sign the Bill.

President Obama said, "it is a simple fix to assure a fundamental right" and then mentioned his grandmother and what this Bill would mean for his daughters.

Lillie Ledbetter later said, "I have spent the last two years actively advocating for Pay Equity to address the wrong that was done to me. " She mentioned that this Bill would not mean one penny to her but that it would mean a lot to the future for her daughter and grand-daughters.

I watched the TV screen, listening to them and remembering my time working as ERA Campaign Director for the League of Women Voters. In 1981 the Advertising Women of New York developed an advertising slogan and ads to support the ERA. The slogan:

Nothing Can Protect Your Daughter Like the Equal Rights Amendment.

How smart they were! Then and Now.

It is a great day - a wrong is made right.