More than a TV Program

My friend Ed Myers, aka Lee Shepherd, invited me to be a guest on his TV program for Fairfax Cable Television. "come talk with us and tell the Wedding Dress story." What's not to love about working with Ed, and some storytelling?

There is a story about Ed's name! And isn't there always? Ed and I have known each other since Miss Terry's second grade class at the Elizabeth School in Charlotte, NC. "You probably saw my first stage performance," I reminded him, "in fact you must have been in it" " Well, I remember being a tree." he said. "That's the one - no speaking parts. Just standing. I was " Mary, Mary Quite Contrary" and I just stood there holding a watering can." He was Ed then - until he entered professional broadcasting on a network television station in Washington. As Lee says, "There was a guy named Ed Myer already on air here and it was too confusing to have two - so I changed my name".

Working with Lee and his co-host, Chuck Langdon, was a treat. 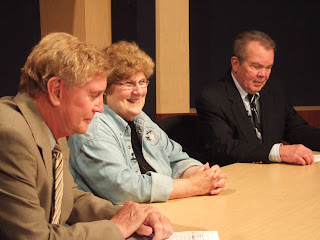 They create a warm easy environment, a skill learned from years of experience. And their voices are wonderful to listen to. Lee started in radio as a disk jockey in Charlotte when we were in high school and his voice has always had a deep smoothness about it - a real radio presence.

Since we don't live in Charlotte - it means a lot to me to be with someone who is a part of the same history. Such connections. No need to explain anything. A quick reference and you know you are seeing the same pictures. Talking about the same people. A street name. A school team. Shared memories.

Lee showed me pictures, "know these people? They are storytellers." Well I am happy I recognized one, Charles Kuralt. The other was a mystery WW II soldier. "Marion Hargrove". Lee reminded me, " we all graduated from Charlotte Central High School." Lee explained that as he works up the story for radio and broadcasts he works in photos and "angles" to enrich the story. Ah, another storyteller.

I hope you have read Charles Kuralt's essays about the people of North Carolina or remember his "on the road" television essays. After graduating from the University of NC he came back to Charlotte where he worked for the Charlotte News. His early columns, short, newsy, human interest pieces, are the seeds for his later work.

After World War II, Marion Hargrove wrote his popular "See Here Private Hargrove." I was still in elementary school when the book came out but I remember the talk about it. And the pride in it. Charlotte was a smaller town then and he was a home-town boy. I remember seeing the movie, "See Here Private Hargrove with Robert Walker playing the lead. And later reading his book - I think I will be re-visiting that book.

Curious about what happened to Marion Hargrove I googled him. I am glad I did. I found this bit of biography on the web.

Marion Lawton Hargrove, Jr., a screenwriter and best-selling author, died on Aug. 23 from complications of pneumonia. He was 83.

Hargrove was working as a features editor at the Charlotte News during World War II when he was drafted into the Army. The luckless private chronicled his basic training experiences at Fort Bragg, N.C., in a series of humorous columns for his hometown newspaper. His stories were then collected into the book, "See Here, Private Hargrove!" which sold more than 2.6 million copies, hit number one on the best-seller list and became a feature film, starring Robert Walker, Sr. and Donna Reed.

After his time in the service ended, Hargrove spent three years traveling through Asia as a staff writer for the GI publication, Yank. When he returned to the states, he moved to Hollywood and wrote nine screenplays and more than a dozen scripts for TV shows like "The Waltons," "I Spy," and "Fantasy Island." He also penned a film adaptation of ''The Music Man,'' which won a Writers Guild Screenplay Award.

Another former schoolmate of ours, Jan Karon, writes about a world we all wish were true in her books about Mitford.

My Hood cousin, Mary Kratt, aka Mary Ran Norton, a well-known poet and southern historian, has written the many times re-published local history, Charlotte. The first time I stepped before a mic as a storyteller was for a program, A Genealogy Entertainment, Mary and I performed together at Queens College.

Thanks, Lee for your example in how to draw more memories, connectios and depth into a story. And thanks, Ed, for reminding me of where we come from.
Posted by ELLOUISESTORY