August 13 was my daddy's birthday. I did not forget - other stuff intervened. He would have been 94 years old - except that he died 14 years ago. 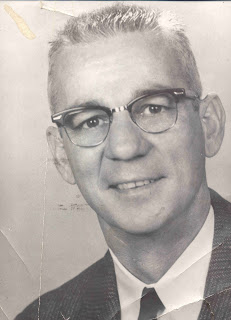 Or maybe he didn't.

This is the picture of him they used in my High School Annual. He was my sponsor that year because I was an editor. He was 39 years old.

For my mother he is as alive today as he was when they got married in 1935. She talks about your daddy and tells stories about or on him. My siblings and I do too.

Whenever Jim and I go to Charlotte we take Mama to Evergreen Cemetary to visit Daddy.
When she was still driving she went every afternoon. Recently I watched her standing at his foot stone talking with him. I wondered what she was saying but it seemed private and I did not intrude.

Daddy was a storyteller and a jokester.

After WWII he had a job as a traveling salesman. Friday night supper was the time for his stories from the road. One time he told us that he heard about a mummy they had in a house in Laurinburg so, being curious, he had stopped by to see the "ugly thing".

Even then I was fascinated by anything that remotely suggested Eqypt so as he talked I pictured a wrapped mummy in a painted box. He either did not go into more detail or I long ago forgot it until recently. An item in a book I picked up in Charlotte - little known bits of NC history - tells the story of the Laurinburg mummy. It was real. Now I can tell the whole story for Daddy.

TIP: Whenever I read an old southern story or joke I test it on my tongue searching my memory as to whether I might have heard it from him or wondering how he would he tell it - if he heard it now. If it feels right for him I may put it on his tongue. And when I tell it I feel him standing close.
Posted by ELLOUISESTORY