What's Behind a Purple Door?

Again today I spent time going through files of photos I have taken when traveling, looking for images for an exhibition and hoping to remember stories. I found this photo.

In 2001 we arrived in Nice from Italy two days after September 11. So, with the skies closed, we were stranded in France on our own. The tour group we had come to meet never arrived from Dulles.

That's why we did not attend Mass at the Matisse Chapel in Vence, France, even though that promise had been one of the major reasons I wanted to take the tour we did. We did go to the Matisse Chapel. Jim and I rented a car and drove up the hills to Vence. It felt like a pilgrimmage to me - to finally see this crowning work of Matisse, one of my hero-artists.

The chapel was a stunner. Since we were on our own, not with a tour, we were in charge of our time. We chose two chairs in the chapel and settled in to take the time to savor the images and to watch the changing color patterns from the stained glass windows as the day light shifted across the room. By the time we were ready to leave we were fully satisfied.

Being in this space with such beauty was a healing from all the horror and fear of those days.

As we left the chapel museum I stepped onto the sidewalk, and looked up to the hill across the street where I saw this gorgeous purple door with purple wisteria blooming around it. 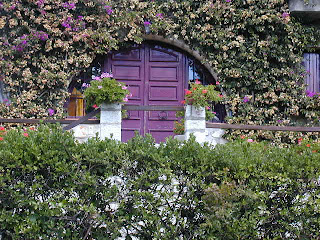 The perfect setting for a story.

What's behind that purple door?

On a whim I googled "purple door' - to see what I could see -
and here is a teaser of what I saw:

Purple Door is a day spa in Wake Forest, NC

Purple Door is a christian band,

Purple Door is a Tea Room in Detroit that looks like a place I would like to go - if I am ever in Detroit again.

Purple Door looks to be an x-rated site on MySpace.

Purple Door is an August music rock band festival in Lewisburg, PA. Its called a well kept secret. Sorry you have missed this year. Looks interesting, try again next year.

And this is just a sample.
Posted by ELLOUISESTORY