Glancing Over My Shoulder 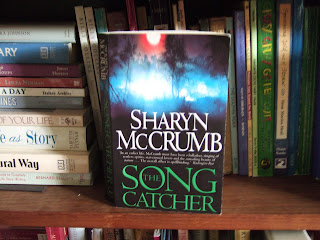 Reading Sharyn McCrumb, The Songcatcher. About a ballad handed down through generations of a southern family, her family.

I am very impressed by the way she incorporates family history into her story. I came to storytelling through genealogy and did much more of that when I first started telling stories. Yesterday I wrote that I had moved away from family history in my storytelling. Sharyn McCrumb inspires me to go back in that direction, asking new questions.

In her biography on her website McCrumb talks about the two worlds of her parents. That's true of mine too. For generations.

Begging your indulgence I am going to noodle on that a bit - right here.

My father's family held themselves aloof, proud of their social position, mostly based on my grandmother's father. He was a County elected official, a very popular figure. A huge picture of him stared back at me from the front page of the newspaper when I looked up his obituary.

My grandmother was the spoiled apple of her father's eye who had been schooled in a Catholic finishing school. I remember her as a tall, artistocratic looking woman who was not prone to spontaneous hugs, in fact I don't remember any displays of affection. The mother of eight children, she was a reader, a versifier, an Anglophile and an avid Bridge player. Nanny was proud of her lineage, especially her Confederate roots, evidently she did not know her Revolutionary War ties. I wish she had looked into it. That would have saved me lots of trouble. All that deep tap root came through her father's paternal family.

Catherine, her father's mother was an Irish immigrant, from Tipperary, who arrived in America in 1837. She came with an extended famly before the potato famine. Maybe they were seeking religious freedom, because they had both money and a trade. She left us our Catholic faith.

Cartherine's family arrived in America through Nova Scotia, went to Albany, New York for a time where they had family, and then came to North Carolina following the little known 1840s gold rush in North Carolina. She married a young doctor and they had eight children. Nanny's father was in the middle of that line-up.

Strange - no Irish stories have been handed down through the family. I was not raised on the Irish stories she must have told her son and that one would think he told his daughter. And that he might have told my father, his grandson. The newspaper articles I found about him say he was known as a storyteller and a wit.

All my aunts and uncles and my father, and many of my cousins have the gift of gab - even though we never kissed the Blarney Stone. There are storytellers galore among us; lawyers, writers, salesmen and I call myself a storyteller and work at it professionally.

Now my Daddy, Robert, was quite a storyteller. He always had a joke or a tale to tell. He was a traveling salesman after he came back from WWII. Monday to Friday he traveled the backroads of North and South Carolina selling household appliances, washing machines and the like, and he loved nothing better than sitting a spell on a small town store front porch and swapping stories with the local folks. Friday nights he came home with stories from his week - stories about the people he met, jokes and his favorites were embellished tall tales that had us saying, "you're kidding". Often he was.

And then there was my Aunt Catherine - probably named for the Irish girl but I never put two and two together. Koki, that's what we called her, was a born storyteller who also had a love and reverence for keeping the family stories. She photographed everybody, clipped newspapers and held on to things. When I began collecting family history I went to her and when I got serious about storytelling - well, she put her arm around me and loved me forward, adding stories here and there and encouraging me to do it. She did not tell Irish stories. She told our stories. And today I am telling the stories she gave me.

But still I wonder. Why don't we have a legacy of Irish songs and stories like Sharyn McCrumb describes from her Appalachian family?

Ever since I discovered my Irish heritage I have ruminated about this. Now, Sharyn McCrumb, in describing her family, pokes me to ask my questions from another perspective.

I will be looking into it to figure out some answers to the question - why aren't our pockets filled with Catherine's stories.


TIP: (That I almost forgot) There are many versions of the same story. Keep asking questions from different directions to uncover more versions.
Posted by ELLOUISESTORY

I think that legacy fell by the wayside in many families, Ellouise. My English mother wasn't interested in old stories or ballads--they were "old-timey" and her WWII generation wanted to be modern. So many of them didn't carry forward the old stuff. A pity, and a loss for those of us who could not sit at our granny's knees and learn them.