With Avila Beach on my mind I can't forget the pelicans. They are so tame on Harford Pier that they sit and preeen for photographs, letting you see all their colors. 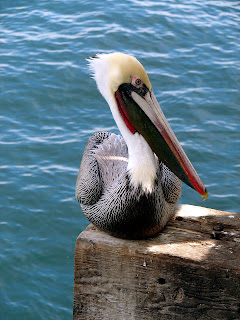 The famous limerick about pelicans:
"A wonderful bird is the pelican.
His bill will hold more than his belican.
He can take in his beak,
Food enough for a week,

But I'm damned if I can see how the helican."
written by Dixon Lanier Merritt in 1910.

As kids we would chant this rhyme, just to get to say the last line.

I think this is an American Brown Pelican. (my photograph) Not knowing much about pelicans, other than recognizing that they are pelicans, I checked google. Wikipedia supplied the information. Here is a prep for your next walk on a pier or trivia game.

FYI: ( excerpted from Wikipedia)
Pelicans are large birds with enormous, pouched bills and long wings. The smallest of the pelican is the Brown Pelican (Pelecanus occidentalis), small individuals of which can be as little as 2.75 kg (6 lbs), 106 cm (42 in) and have a wingspan of 1.83 m (6 ft). The largest pelican species is believed to be the Dalmatian Pelican (Pelecanus crispus), at up to 15 kg (33 lbs), 183 cm (72 in) and a maximum wingspan of nearly 3.5 m (11.5 ft).
Pelicans feed either by group fishing or plunge diving - which is used almost exclusively by the American Brown Pelican.

Pelicans are gregarious and nest colonially, the male bringing the material, the female heaping it up to form a simple structure. Pairs are monogamous for a single season but the pair bond extends only to the nesting area; mates are independent away from the nest. 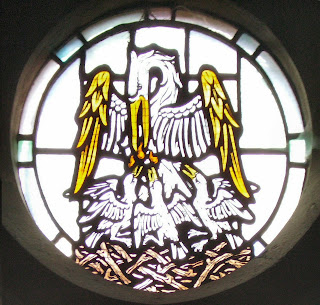 And what's the story of those old pelican stained glass church windows, you ask.

In medieval Europe, the pelican was thought to be particularly attentive to her young, to the point of providing her own blood when no other food was available. As a result, the pelican became a symbol of the Passion of Jesus and of the Eucharist.

It also became a symbol in bestiaries for self-sacrifice, and was used in heraldry ("a pelican in her piety" or "a pelican vulning (wounding) herself").

Another version of this is that the pelican used to kill its young and then resurrect them with its blood, this being analogous to the sacrifice of Jesus. Thus the symbol of the Irish Blood Transfusion Service (IBTS) is a pelican, and for most of its existence the headquarters of the service was located at Pelican House in Dublin, Ireland.

This legend may have arisen because the pelican used to suffer from a disease that left a red mark on its chest. Alternatively it may be that pelicans look as if they are doing that as they often press their bill into their chest to fully empty their pouch.

This is especially good to know for the next trivia game:

That's actually pretty funny because I remember this one time I went on a family vacation and on this family vacation while being in San Francisco I took a steady picture of a seagull that was simply standing still. And right before I took the picture Mr. Seagull here decided to spread its wings and take off! But... Little did the bird know I took probably the nicest picture in the world of the seagull in mid air with wings completely expanded in mid flight. Sounds cool ey?? :)