A Bit About the 3 Rivers Storytelling Festival

For those of you stopping by on a first visit - My husband and I went to Pittsburgh for the Three Rivers Storytelling Festival but I only heard one day of stories. My husband had an emergency admission to Allegheny General Hospital and was there for the week-end. So for the past few days instead of writing directly about a storytelling event I was writing to "catch" the story Jim and I were living.

We returned to Maryland today. Now I am backing up to capture those parts of the festival that might be of interest to folks.

Friday, before the serious storytelling started, there were four workshops scheduled with Dan Yashinsky, Billy Teare, Elizabeth Ellis and Charlotte Blake Alston. Since Charlotte's was designed for teachers I decided to keep that time for sight-seeing and other business.

TIP: Over the years I have learned a lot by watching how featured tellers interact among themselves and with the folks. I was very impressed that these tellers sat in on each others' workshops. They modeled caring and support for each other and at the same time made themselves available to those attending. It was rich. And fun. And, a lesson.

Dan Yashinsky talked about the importance of examining your stories and identifying those moments of suspense that keep the listener tuned in to the story. He had those attending tell a bit of a story and stop where you thought the moment of suspense was - try it. Its not always what you might think. Dan is most engaging and sets such a comfortable atmosphere that even my husband shared a story - - and he is not a storyteller. Its a good story that will be very tellable if he decides he wants to do it. When it was my turn I told a short personal story I have been working on and with two comments Dan and Elizabeth Ellis suggested a change that feels right and takes the story to a new level. 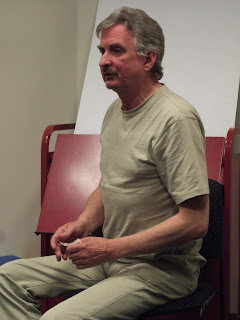 Billy Teare, a teller from Northern Ireland, told a delightful rendition of Lazy Jack to set up a discussion of types of stories. He added surprising audience participation to the story which cracks it open in a new way. He demonstrated a memory technique he uses which was way over my head but his presentation was so delightfully that I enjoyed watching him do it. 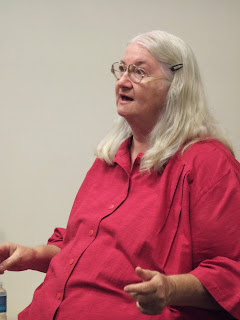 Elizabeth Ellis, who is very well-known for her personal stories, gave a workshop about folk tales, their structure and their importance for the storyteller and the audience. Elizabeth Ellis always has something valuable to say.
In my opinion Ellizabeth speaks and pearls come forth.
I appreciated being reminded that when you read or tell a folktale they speak from a whole culture, not just from one person's experience.

TIP: I heard this over the week-end and I do believe this comes from Elizabeth Ellis - When you encounter someone you admire and respect seek opportunities to study with them. Sit at their feet, as it were, like they used to do in the old days. This has nothing to do with age -either of the teacher or the student. It has to do with finding the strengths and skills that will help you achieve your goals. (Elizabeth Ellis is such a person in my eyes. My advice is - if you have a chance to take one of her workshops don't pass it by!)

The opening concert that evening was fine. All the tellers were on!
I do want to give a special nod to Billy Teare - 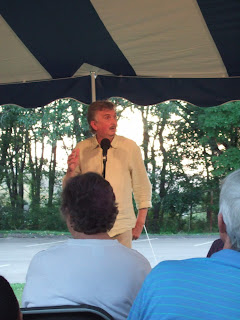 He arrived in Pittsburgh after an arduous two day mis-adventure of canceled and delayed flights and no sleep - but his baggage did not make it. And all his musical instruments he had planned to use for his performances were in the baggage. he said, " I guess I will just have to tell stories." and he did! and he was funny, and charming and it was a good time for all. WOW!!!

I particularly enjoyed the ghost story concert because Susannah Holstein aka Granny Sue, a West Virgina storyteller, was telling. I first met her almost ten years ago at the West Virginia Storytelling Festival when she was just starting out. Through all the storytelling she has done since then, and its a lot in West Virginia and other states, she has grown into a seasoned professional who held her own with the featured tellers. Brava, Granny Sue.
Posted by ELLOUISESTORY