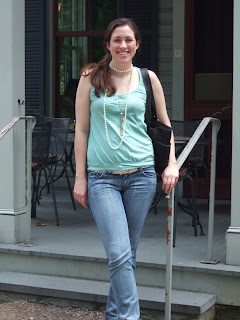 Twenty one years ago our oldest grand daughter, Juliana, was born in Munich, Germany, where our son was stationed with the US Army. We believe in marking passages so Jim and I took her to lunch to celebrate. We had a lovely visit and that was as much a gift to ourselves as to her. We caught up and talked a lot of shoes and ships, and cabbages and kings. And Harry Potter ofcourse. 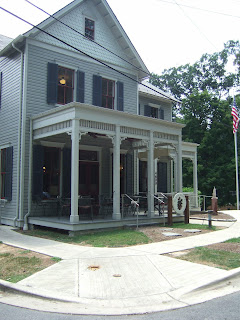 We chose the Black Market Bistro in Garrett Park because I used to bring Juliana here for lunch when she was a pre-schooler. The old house sits right beside a train track so you always have at least one freight train with your meal. We did.

I had hoped we could sit on the porch as we used to but because it too hot they had closed those tables.

Have you noticed? Nothing stays the same.

This used to be a modest place with sandwiches and the like - called something else. Now as the Black Market Bistro it has a slightly French counry atmophere and delicious food from a very interesting menu. The smooth pureed gazpacho sported a sprig of cilantro on top. It was just right on a hot and muggy summer day. We each had the summer salad with additions. I selected grilled shrimp for mine and they were wonderful - marinated and then perfectly grilled.

We agreed that we are not waiting for a birthday to come back.
Posted by ELLOUISESTORY