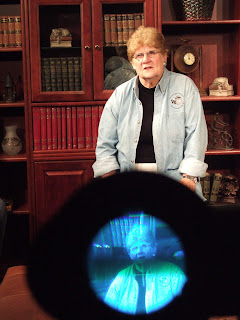 Today I taped a new story for 'the Stories in Time' TV show.

Well it's not a new story - only new for me to tell. How Jack Got a New Shirt.

Lately I have been caught up with Jack Tales. They water my North Carolina roots. I found a bare-bones of the story on the web and re-wrote it, adding dialogue and plots twists. As I worked with the story I began imagining a 9 year old skinny Jack who looked and acted a lot like our youngest grandson Scotty looked and acted a couple of years ago . Scotty like Jack has older brothers who laugh and tease so there were images for those scalawags as well.

When the images of Scotty and his brothers popped into my head the story began to flow. The image stayed with me for the telling this afternoon. I am going to love taking the image of Scotty with me when I tell this story at schools this year.

TIP: When working on a story having a mental image of someone you know who fits the character helps with bringing life to the character and the story.

My first version of the story was OK but it felt like it was missing something. When I told the story to Jim a couple of days ago he was quiet for a few minutes - then asked, "where is the suspense? you need something to involve me more." We tossed it around for a few minutes and then, of course, why did it matter that Jack got a new shirt.

A few weeks ago Jim and I attended Dan's workshop in Pittsburgh and he talked about creating "the suspense" that keeps the listener connected to the story. So when Jim asked the question, "where is the suspense?" we had a common understanding of what he was talking about - of what was missing for the listener.

Our common understanding was the magic so that I could make the most of Jim's feedback on the story.

Thanks, Jim.
Posted by ELLOUISESTORY

Where did you get the story "How Jack Got a New Shirt"? It's on my web site AppLit. I'd love to know more about your version.