From Leo: Winding Up 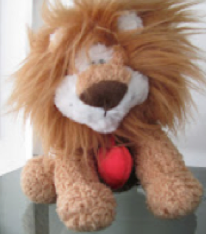 Lots of things have been going on here the past week. The closing of the Capital Fringe and Jim's burial at Arlington.

Ellouise asked me to tell you a few things you may be wondering about.

Ellouise's last Capital Fringe performance of Pushing Boundaries was Saturday July 28.  Her family came for the closing show including her daughter Robin and grandson Scotty from California. It was a great evening. She really hit her stride in the telling for a large audience of positive folks who came to hear this particular story. Nice. Good note for her as she is taking a storytelling break in August.  Jumping back in to tell Pushing Boundaries at the Fringe was hard - - without Jim. She weathered that storm and says she's stronger for it. 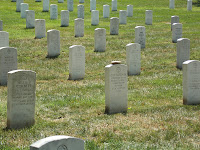 Sunday July 29 - Ellouise and her family went to Arlington --- to switch gears, to feel the space, and to prepare for Jim's burial on Wednesday. They picked a shady spot under a large near-by tree where they sat down. They told some family stories, laughed, shed a few tears and talked of ships and cabbages and kings. It would have been easier on a cooler day; even so it was a good thing to do.

Ellouise was startled to see a stake in the ground where Gretchen's grave was "marked" for opening for Jim on Monday. It made the coming farewell powerfully real. But they had come for this reality-check - hoping to open the way to really appreciate the ceremony ahead.

Wednesday at noon family and friends began gathering outside the Old Post Chapel at Fort Myer, Va for Jim's Mass. The Old Post Chapel sits outside the brick wall which borders Arlington Cematary.  The day had started out gray and over-cast but by noon the sun was bright, hot but not too hot which was a blessing.

Ellouise was glad her son Jim, Jr. had enlarged a photo of Jim in his AF Uniform to have along with a more recent picture of him. I heard her say, "I love that picture - he looks adorable - just like when I first met him."

Later in his Eulogy Jim's long-time friend and associate Don Mosher, MD remembered when they served together in the Psychiatry Department at Andrews Air Force Base and were receiving and treating the flood of airmen suffering with PTSD who were brought directly to Andrews AFB from the Viet Nam war zone. It was not easy duty.

Don also reminded Ellouise of a day when Jim received an emergency call from home that interrupted a patient session - asking for advice about a moribund gerbil - expiring in the kitchen surounded by their three kids. He told Don later, "I wasn't trained in gerbil first aid and certainly had no idea about gerbil resusitation."
Ellouise remembered that call - and that he recommended a swallow of Brandy, "for the gerbil?"
"No, something for you." 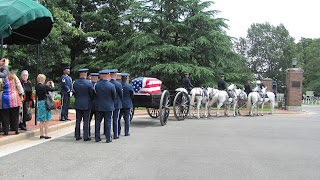 The procession to the gravesite formed up - a Band in the lead followed by the honor guard and the rifle team which would render the honors - a 21 gun salute - as well as the bugler who - standing at a distance - would sound Taps. Then the caisson, with Ellouise's car immediately behind the caisson, a contingent of famly and friends who were walking, followed by the remaining cars.

The procession to the gravesite which is located to the left of the Tomb of the Unknowns was almost a mile. Arlington is quiet. You could hear the cadence of the footfalls of the Honor Guards and the clop clop clop of the horses - along with an occasional song from the band and the background beat of the drums. 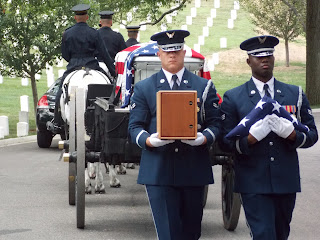 Jim's urn rests in the box designed and created for it by friend and master craftsman Jack Abgott.
The dark wood is maple symbolizing heart and the light colored wood is eucalyptus symbolizing healing  Inside the urn is wrapped in one of Ellouise's textile works and it is surrounded by private personal notes from the immediate family. 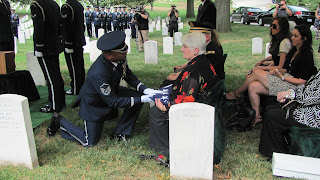 At the end of the ceremony and honors Ellouise received the flag "with the grateful thanks of the President and the Nation for your husband's service."

It was a beautiful and awesome service. Ritual takes out the sting for a short time.

Afterwards there was a reception at the Fort Myers Officers Club which is located conveniently outside the gates near the Old Post Chapel.

The gathering of fifty people was private and personal.  It included family members, dear and longtime friends of Ellouise and Jim and their kids so the reception was especially warm and lovely. Ellouise and her family were deeply grateful to all who came to  be with them.

A fitting way to wish Jim a fond and loving Bon Voyage.