Ellouise is working her taxes. That's the 2011 taxes.  She has asked me to blog a bit for her this morning. 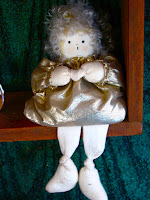 I am not exactly sure what I have to say. Jim and Ellouise packed me away and while I was out of sight I lost touch with this world. Better question yet, what is this world? It has certainly changed.

Jim is gone. He died in March. Ellouise is working adjusting to that - on making a new life for herself. None of that is easy. Nothing is the same.

And how - nothing is the same. Monday Ellouise had to fill out paperwork in a new doctor's office - the first time all the info is changed to her new status - being a widow. That was hard. Then yesterday she had a major dental appointment that required "gas" - and for the whole 2 hour session unbidden tears coursed down her cheeks. "Are you all right?" the dentist asked. "Yes."
What a lie.

So, here I am as a guest blogger. Where can I possibly fit it?

I will start at the beginning. Take this morning for instance.

This morning there was a new white blossom on the gardenia plant that is sitting in the middle of the dining room table. It has a strong scent that is filling the place like someone had come through with an atomizer pumping out perfume.  Its not a perfume I would every buy for myself  to wear - it smells a lot like an old lady. I have always thought gardenias and boxwoods smelled like old ladies - - but everyone has their own taste.  Ellouise loves it and told somebody that it reminds her of North Carolina. Hmm.

I come from California.  The sweet perfume from rows of blooming orange trees in huge orchards in the "valley" - that's what I like.

Another thing here ... enough with watching the Hallmark Channel. How much sweetness can one grown woman stand? I "get" that Ellouise is resting her brain and does not need challenging plots right now - but going all the way to "dumbing down". That seems over-the-top.

And, this little dog that lives here. She looks like the old dog ChuChu but I knew him and he was never as stubborn as this one. Lately Ellouise is having to cook rice to go with the dog food to help settle her doggie stomach and staunch the diarrhea. Ugh. Leia, that's her name, is Jim's dog and really had little use for Ellouise. Snapped at her if she came too close. But the dog is stubborn - not stupid. After six months she is getting it that the food now comes from the enemy. She is warming up to Ellouise. It looks to me as though they understand each other and are making a sort of "friendship."

If it were me, I would never have gotten that little dog - but no one could convince Ellouise it wasn't a great idea. You might say - she brought this on herself. Then, in the beginning,  Jim stepped in and adopted Leia. He fed her, played with her and trained her. The dog has a routine of tricks. She even  dances.

As I see it what these two females have most in common is how much they miss Jim.

Talk about being "in flux".

That's what death does, isn't it? It creates a new normal ---

And, then leaves people to cope with it on their own - no workbook.

Re: muddling through.
Death smacks us upside the head with daily reminders that there is no rehearsal period. We can't wait til we're pretty sure we've got it right before we start living out our lives. Sometimes Living in the Present is a hard gift to accept.
Thank you, Lorla, for shining a light on one person's journey.

Thank you Lorla,
Another insight into how Ellouise is surviving.This is a journey Ellouise would have never chosen but she is fortunate to have faithful travel companions
Gardenias are my favorite. I still morn the 2 large ones by the deck that didn't survive the GA Freeze of 2010. Their fragrance reminded me of Granny because she didn't like them. That's crazy for you.