Without a Clue - A Cautionary Tale

When artist Nancy Cusick died out-of-town several years ago, the family brought her to Arlington National Cemetary to be buried with her husband Tom Fox. I must have been out-of-town because I never knew that until I discovered her death when I googled her last year and found - not a recent show in SC where she was living but her obituary.

I had attended Tom’s Arlington burial nine years before and knowing their devotion to each other felt certain Nancy would be buried with him.

As I was going to be in the neighborhood the other day, I decided to stop by her grave in Arlington National Cemetery to say a belated good-bye.

Well it wasn’t—even though it could have been.

My first step in locating her gravesite in that huge place was to check the grave locator on the Arlington National Cemetery website. Its very straightforward. Type in the name and it pops it right up. Except that it didn’t. I typed in her professional name again. No luck.

Fortunately I knew her husband’s name and rank and, as I said, I assumed she was buried with him. So I looked up Tom. Easy. But there was no mention of Nancy.  I took down his location determined to go to his site and see for myself.

And what did I find?

A lesson for women. 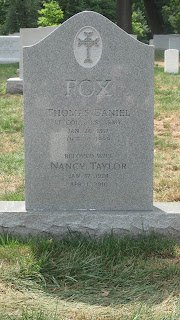 Look at this. Its a lovely grey marble stone - but it is wrong.

The lovely monument says Tom Fox is buried with his beloved wife Nancy Taylor.
Who is she?
This is not Nancy's maiden name—or her long time professional name Nancy Cusick.
It is probably her middle name - which no one knows.

So I am spreading the word.
Women need to be identified as they are most known, otherwise they will be lost.

I often tell a story - "Your name is your first story." In this case...it is possible this could be Nancy Cusick's last story.

Don't let that happen to you.

Nancy Cusick.
This picture was taken in Nairobi Kenya at the 1985 UN Conference on Women. Nancy, along with Cynthnia Navaretta and me, organized Global Focus, a project to represent United States Women Artists during the Conference.

My friend, colleague and former art professor Nancy Cusick Fox died April 1, 2010.  I first met her in 1968 when she was teaching Art History at Dunbarton College of the Holy Cross in Washington, DC, and I was her student. Thanks to her insistence, I attended the first ever national Conference of Women in the Arts with her and that gathering opened the doors to what became my career in the 1970s women's movement.
Nancy Cusick was a dynamic, interesting, energetic and funny woman as well as a compassionate and caring friend.

She was a very talented artist, teacher and a memorable figure in the 1970s national women artists movement and on the Washington art scene. She was a founding member of the Studio Gallery, a leader at the Washington Women’s Arts Center and a long-time exhibiting artist with Gallery 10.
Posted by ELLOUISESTORY

It is nice to see this note. Women definitely need to be known. we purchased our home from Nancy Fox, as well as four pieces of art. I am currently in search of family or art afficianados to determine if one set is of interest for sale.
Christine Erbacher, Vienna, VA