Catching 1970s Second Wave Stories - before they slip away 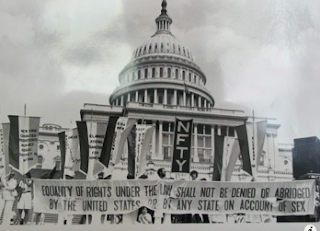 Pushing Boundaries is my memoir of the 1970s with ERA as the centerpiece. Tomorrow at 7:15 PM is the last performance at the Capital Fringe.

I love reliving-by-story those years when I morphed from a very traditional southern girl housewife to a national ERA activist.

My transformation started in 1968 when, as a 29 year old mom,  I decided to go back to college. That decision led me to the streets of Washington DC on July 9 1978 to be a part of the NOW organized march in support of the extension for that campaign to ratify the Equal Rights Amendment.

These days when I tell this story I close with a Q and A and ask for memories of those times from the audience. I relish hearing their stories.
For instance during this run -
*  a middle aged man told me, " my mother was President of the Massachusetts League of Women Voters in the late 1970s and she took me to all the ERA rallies. I remember all about that campaign."

*  a Capital Hill professional woman told the audience about working for a young Congresswomen in the 1970s and about how she marched on July 9, 1978 alongside a small woman who would later become a Supreme Court Justice.

*  two women told me stories of being on members of the first Women's Commission in their state.

*  an Honorable women who has served more that 35 years in both the House and Senate of her state talked about how hard it was for a woman to get elected in the 1970s.

*  an artist remembered days when she was a member the Washington Women's Arts Center - "it was wonderful."

*  women at all performances raised their hands, "yes" - they were members of Consciousness Raising Groups where women talked about the "issues" and learned the power of Sisterhood. 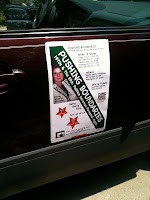 These stories add a special life and meaning to Pushing Boundaries because our stories of that exciting and challenging time for women are not told in text books.
Our daughters and grand-daughters will not know the full fabric of those years when women were pushing boundaries for them if WE don't tell them.

We are the veterans of the 1970s. Our hair is silver and sometimes our steps falter. Think about it. We could slip away without telling our stories.

Please join the effort to collect these stories. Tell us your story in a comment to this post or go to facebook.com/secondwavealbum and post a comment or picture there. If you don't feel comfortable doing either please send me an email at ellouise1@juno.com and I will post for you.

If you weren't there maybe a woman in your family was. Ask her. Add her story!