Getting ready for the Fringe includes mundane tweaks like repainting the chipped paint on my stool. That's like putting on lipstick.

Preparing a program and taking it to Staples for copies. I like to have them fold it for me. The crease will be precisely in the middle and the it will be sharp.

Have to buy a new countryman head-piece mic. When we tested yesterday - mine was broken. I guess after 5 years I have gotten good dollar value out of it. For me the head set is much better for a long performance than the I like using the lavilier. The trick is to anchor the mic wire to your face with clear band-aid strips so that it won't slip. Jim was great at that.

I bought a smart white linen jacket that I really like. Ordinarily I prefer to wear "experienced" outfits for performances so that I don't fidget with my clothes but this is a plain simple jacket and like anything light weight linen - it comes with a slightly lived-in look. 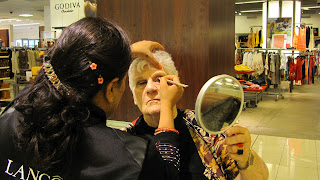 On a whim I went to Macy's for a make-up refresher. It was fun and the woman knew what she was doing  - and I was pleased with the new me.

It was all fun except for one thing. They re-use the make-up brushes from client to client. Although she assured me she was cleaning them with antiseptic "brush cleaner" I was a tad apprehensive - but went ahead with it anyway.

Drat. This is a word of warning for you.

I should have followed my "feeling". Several days later I was on the phone to my doctor for a topical antibiotic for a new infection on my face. Not exactly how I wanted to face an audience. Vanity. Vanity.  and I hope will be restored by Saturday.

When I was taking a creative writing class at the University of North Carolina I wrote a story about a young woman who - when she afraid - or nervous - chose her outfit carefully - usually wearing red because it made her feel brave. That's the job for the birthday shoes Karen gave me -