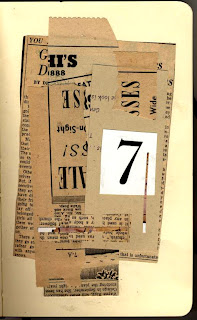 Pages from an old 1950s Charlotte Observer that I had saved in a box in my studio finally see the light of day again in this collage. I clung to those pages for years as if by keeping them I would never lose those past days.

Funny - once I used some of the stack I had been preserving in a series of small collages it felt all right to toss the rest away.

Holding on is one of my problems. Perhaps its a hang-over from my mother's "depression - era" thinking about things. She used to say that we could not understand because we had not lived through those times.
I am sure that's true.

However I lived through some tough times with Mama and Daddy which left me clutching useless things for protection even though I did not need to.  Then on top of that I embraced collage making - which requires collecting and storing the world's discards - ditritus to be transformed into art.

For some time - holding on - is something I have wanted to face and work on - - to turn that holding on into letting go - and see what happens. People say you open doors for new work and new ideas when you stop holding on to old ideas and old materials. We shall see.

Recently I accepted help with thinning the accumulated "stuff" that has been overwhelming us in the house we have lived in for more than 40 years. My studio was a particularly tough job. At first it was extremely difficult to toss useless possibilities into the trash bags - until I began to see space opening up on shelves that had been stacked and packed with bits and pieces.

We found forgotten things - bringing back memories - resurrecting stories. All that had been buried - out of sight - hidden - robbing me of parts of myself.

I am still sorting and sifting and tossing - - feeling lighter.

Its a feeling I want to continue.
Posted by ELLOUISESTORY