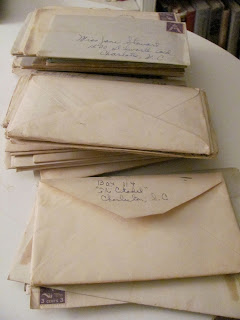 This stash of letters between two young people in North Carolina was a very lucky find.

There are 68 letters dated 1942 - 1944 in this bundle I found in a collection of family papers being sold in a used bookstore. They came from an old woman's attic in Charlotte, NC.

The letters are all written by the same young man to his sweetheart, Jane, from the time he was in a boarding school, to his days as a college student at The Citadel in South Carolina and then Davidson College in North Carolina. In 1944 the boy was drafted into the Army and the subjects of the letters shifts from parties to combat training.

When I found them they were tied together with a blue ribbon - I presume Jane kept them. I wonder if they married and she kept the letters or - as happened in many cases - was he a casualty of the war - - and this packet of letters was her only connection with her young love.

He sounds so young and naieve as he declares himself to his love - pleading with her to write more often and to save dances for him. I imagined him as Robert Walker played the young soldier-grandson in the classic WWII home-front movie, Since You Went Away.  His love deepens in this two year period and he thinks of her endlessly when he goes away to the Army. He tells her of the fellowship with the other new soldiers and describes the card sharks and the wise guys in his barracks. He also writes of the battle trainings and although he does not say so out right he hints at his fear.

Through these letters you have a glimpse of the young men of WWII who were pulled away from schools, colleges and jobs and sent to battle.

I  love old letters. They are a magic carpet to the past.
Posted by ELLOUISESTORY