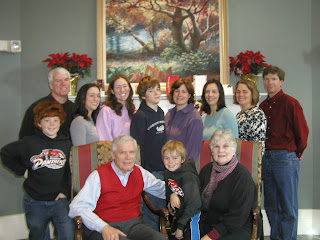 We bought a time share - and points - about ten years ago as a gathering point for a far flung family to get together. We have had some great times which has made it very worthwhile.
We gathered to celebrate our 50th wedding anniversary at Greenspring in Williamsburg - December 2005
It was easier to get everybody together when the kids were small and we were not battling school schedules on two coasts and all those kid-commitments that crop up.
So lately, Jim and I have most of the points to ourselves - to use or lose. Which led me to yesterday's small drama - playing the point game.

With some last minute help from Robin I parceled out 15,000 points with our time share company that I was about to lose.

At the beginning of 2008 we started out with half of last year's points added to the new 2008 points. I thought that would be a good thing. We had two apartments at Greensdpring during the Williamsburg Storytelling Festival. I offered time to Jimmy et all but their schedules are very busy. Jim and I traveled a lot this year - but never to places where we were using Time Share points - - so the clock kept ticking. The points were on hold.

Until our point balance dawned on me a month ago - I saved what I could for next year - what was left were old points - this is USE or LOSE.

That got my attention.

LOSE these points we paid dues on - absolutely not.

But I tell you, getting rid of a stash of points is like dealing with the salt grinding machine that won't stop. They multiply - and perfectly wonderful resorts don't cost as many points as you hope they will.

I found out I could trade - go places outside the properties owned by our company - meaning we could use this year's points next year. Ofcourse there is a fee - that's why you can trade.

I know, I know - what will I do when next year's point kick-in if I use my 2008 points to book travel for 2009? But since those 2009 points are not really real yet - I just ignored them. Like Scarlet, I will worry about them tomorrow.

First I traded for a week at Bass Lake when we go out to CA for the Rogue Festival - A chance for a long over-due trip to Yosemite. Smart, Ellouise. I was patting myself on the back. Good job!
Then came yesterday - the day the chance to trade would slip through our fingers as the 2008 points would no longer be good for trades in 2009. And I still had 10,000 points to deal with.

At this time of the year - everything seemed booked. Until I found a ski chalet in Virginia two hours away. Ah, good - and it was available Thanksgiving week-end. Have turkey at home, drive two hours and see a sight or two. Watch other people ski.

So what that you really don't want to go anywhere, that you would rather stay home and clean your house. I had already decided that even though you have to book for a week - you don't have to stay a week - I mean, this is a found vacation, right. One that is slipping away if you don't save it.

I called our daughter Robin in CA.
"Go somewhere.
Please think of somewhere you want to go in 2009 - and we have to book it before 10 pm tonight or the points will expire."

Robin has teenagers. Teenagers really complicate family scheduling - they are so busy, so socially engaged, so otherwise engaged.

But Robin is a former corporate banker. She is resourceful. Tough corporate experience is an added plus for a mother of kids of any age but when you have teenagers a mother has to be an inventive and skilled manager just to get the family together for a dinner.

Robin studied her calendars - juggling two schools and heaven knows how many sports and teams - she saw a break - an opportunity - Spring Break. It worked.

Two units at Lake Tahoe in March. What's not to love! Even teenagers love going to Tahoe.
Heavenly will be heavenly.

A special hurray for schools and teams who issue schedules a year in advance. I am sure there is a mother behind that.
I am grateful to Robin for the "bail-out."
Jim and I are happy - we are DONE with points - until Janaury 1, 2009.
Posted by ELLOUISESTORY

Now you can sit a moment and think about all the pleasure those points will make possible.