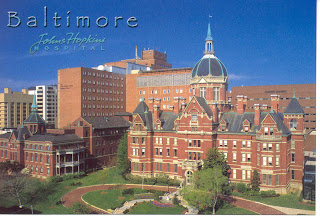 Baltimore
Jim and I spent the first half of the day in Baltimore. He was attending a meeting and I had a chance to play in memories on a beautiful sunny day.

After I dropped Jim off I retraced my steps to park conveniently in front of Enoch Pratt Library - just across the street from the historic Catholic Basilica. As the bells rang out at 8 am I walked up the step and into the beautiful church just as red clad Cardinal Keillor completed his early morning Mass.

When I left home to seek my fortune in 1954 I came to Baltimore as a first year student at the Johns Hopkins School of Nursing. Baltimore was the largest city I had ever been to at that time. This Basilica was the first really large church I had ever seen. One Fall Sunday afternoon I walked over from Hopkins Hospital with several classmates for the 5:30 pm Mass - the "last chance" Mass they called it. The soaring dome ceiling took my breath away. I remembered seeing Jim, "that cute guy" I had seen at St Michael's, the Hopkins neighborhood Catholic Church.

Sitting one of the same wooden pews in the beautiful, quiet, light filled space I enjoyed revisiting memories of those earlier days.

Later I spent time in the Maryland Collection at the Enoch Pratt Library reading early City Directories looking for information on my grandfather who was born and grew up in Baltimore. Picked up one clue on a family story so I know there will be more trips to these files ahead.

TELLABRATION 2008
Tonight Voices in the Glen sponsored the local area Tellebration. It was held in the Kensington Row Book Shop. The house was full; all seats taken with people standing in the back of the room.

Six tellers told a variety of stories which kept the audience laughing, engaged and entertained for ninety minutes. 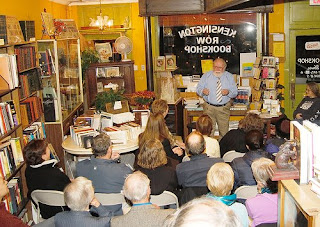 Bill Mayhew opened the program with a well-told and very funny selection of the late Doc McConnell's stories as a tribute to Doc. It was a good opener.

Jane Dorfman closed the evening with a beautiful rendition of a classic Irish Finn tale.

One man told me it was "the best Tellabration I have been to."

A very satisfying evening of storytelling.

A local newspaper,The Gazette, sent a reporter and photographer. Their view of the evening appears on Wednesday.

As for me, I am still smiling and enjoying a fine time