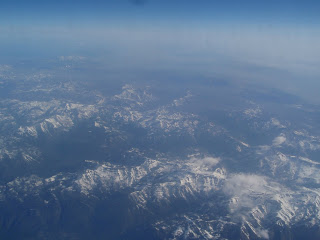 When Jim picked up his messages Sunday evening there was a call from American Express asking him to call back. Something about our account.

He did. The first I knew of it was a call from downstairs, "Ellouise, pick up the phone." His tone of voice said NOW.

I picked up. "Ellouise this woman says there are charges on your card that she needs you to approve." I was surprised. What had I purchased that would warrant an approval?

"Madam, " the voice spoke in the distinct English we recognize from Bombay. " Madam, give me the last four digits of your social security so we can verify who you are."

"No, I never heard of the first company and I am not going anywhere. I wish I were but I am not."

"We have not paid them. Our system tagged them as suspect so we could not pay them without your validating them as actually your chages."

"Well, those are not mine."

"No problem, Madam. And, we will cancel your card and re-issue with a new number. The card will be arriving over-night."

It was simple. Painless. And very scary.

Identity theft. False charges. It happens so quickly - so silently.

The new Americasn Express card arrived this afternoon. Ready to sign and use.

Maybe I will and maybe I won't.

In any event - thanks to American Express Security.

Without them we could have taken an unexpected flight into debt - without packing a bag.
Posted by ELLOUISESTORY

Oh yeah. I had a call like that last Fall. Be careful though--sometimes these calls are scams too. They ask for personal information and next thing you know you just gave away your identity. Better to call them back to be sure it really IS your credit card company. I did that by accident, and found out that I'd actually done a good thing.

So fast these things happen. It's crazy. Glad they caught them. On the other hand, they will also call those of us who are merchants if we bill more than expected. I had a client who paid me thousands of dollars and my bank called me to be sure I was supposed to charge that much. A good bank issuer is a good thing.