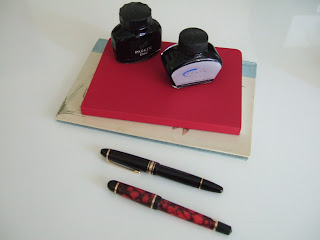 A yellowed and water stained page was loose on the bottom of one of the boxes of journals in the basement. The page is written in July 1974. That's the summer I was taking summer-school classes for my Masters Program at American University.

This is the set-up for the incident I wrote about.

July 10 was an ordinary day - at a time when cell phones were not a given in every pocket.

Jim left at his usual 6:30 am on his daily commute to his office down-town where he had scheduled a full day of  patient appointments. I left home several hours after him for classes at American University.  Jimmy (18 ), who was working as a life guard left at 8 am to open a near-by pool. Karen, 16, also a life guard, was sleeping in on the 10th.  Robin, nearly 15, did not have to check in at the neighborhood office where she was a junior administrative assistant until noon that day. By 9 am the house was quiet.

For no reason - the page opens saying - My Aunt Mary Cobb suggested I record some of the humorous anecdotes which occur around here -
"perhaps you can use them someday."

Monday returning from A.U. at 4:30 pm after a Modern Art Exam I was startled and a little unnerved to recognize Jim in his car waiting for the light to turn green at the corner of Reno Road and Nebraska Avenue - he was headed back toward his office. That was strange because I knew he had a full day scheduled. I honked the horn and waved - he waved back and smiled, He did not look upset in the few seconds I saw him as my green Volvo passed his blue Toyota Supra.

Driving the rest of the way up Connecticut Avenue I calmed myself with repeated reassurances that
he looked calm. If anything DIRE had happened he wouldn't be going back to work.  But I knew that something had happened.

First thing I saw when I walked into the house was Karen sitting on the couch watching T.V.
"Why was your daddy at home this morning?"
She barely looked up and said. "He had to call the plumber."

Then she told me that she and Robin woke up about 11 am to smell gas in the house and they heard a
roaring sound in the basement! The water heater hose had come loose and water was rushing in filling the entire basement - 4" of water.

"We called Dad on his "emergency line."  - - he rushed home.
"We knew you were having a test - and we did not know where to call you anyway."

Jim told me later that he received the call just as a new patient finished telling him about her husband who was never home - " and I get called away to handle a problem at home.
Really great timing."

I laughed when I read this today. It was an everyday I had forgotten  - and love remembering --especially as it spotlights a time before cell phones and reminds me how we worked out a solution to keep our family lines of communication open.

The year before when Karen had fallen at school and was in class they were unable to reach me or Jim.  Karen was not badly injured but when there is an accident schools want to talk with parents - then. 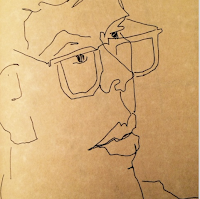 Clearly we had to work out something since I was not a stay-at-home Mom anymore and Jim closed his phone when he was with his patients.
So - Jim installed a new line for incoming calls only which sat on his desk. The rule was - only emergency calls

As Robin likes to say, "Dad had us covered. He was our essential personnel."

BTW - Jim was a Psychiatrist. His leaving the patient was a big decision. But he did not hesitate to head home - -
and the patient came back.