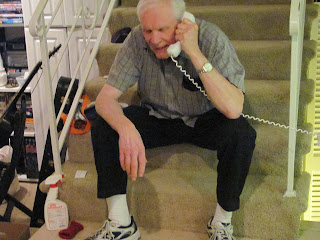 Jim was always willing to listen and to talk when I was thinking my way into a new story.

As I woke up this morning I was still in a dream with my arms around Jim and his holding me. He began to melt away as I became more awake so I quickly whispered "thank you for coming."

The Christmas holidays are a testing time for me and the family. We miss Jim. The games and days have lost a bit of their sparkle and joy without him. "Dad always added the happy" Karen said yesterday. "That's true," I said and added, "now we have to work hard on our own to make the "happy" happen." That feels like a tall order and I am grateful I feel more up for it than I did for a long time.

Our 60th wedding anniversary is this week.

Last night my son Jim called to set a date to go with me to see The Force Awakens, the new Star Wars movie playing at the Uptown movie theater on Connecticut Avenue. I am a devoted Star Wars Fan and I love the Uptown Theater.

New Years Eve, 1955, on our honeymoon in Washington, DC, Jim and I went to see 'What Happened to Harry" at the Uptown Theater.

Change is ever-present in this city. Buildings regularly fall to the wrecking ball and rise ugly. However, very little has changed in the l930s-1940s low-rise shopping area where the Uptown theater is located. I often think about it's timelessness as I drive down the long familiar stretch of asphalt and pot holes.

Jim rides with me. Even though he has been gone almost four years he would not be a stranger on this path. Connecticut Avenue is the primary way we traveled to and from DC after we moved into our house in 1970. Memories crowd every inch of the way from Constitution Avenue to our turn off at Manor Road, Chevy Chase, MD.  For ten years Jim's favorite office was at the corner of Connecticut and R Street. When I worked for the League of Women Voters their office was located on M Street so I rode with Jim mornings and evenings most days. Newly empty nesters   with our kids off at college we often stopped along the way for supper out.

When I talk with him now I point out any changes - like favorite restaurants that have moved or closed or an empty lot where once there was an old building. I also remind both of us of things that happened like the morning we drove to George Washington Hospital for his surgery or a hurry-up ride to National Airport to put me on a plane to Africa. This is my way of keeping our story alive.

I do miss hearing his take on things but I know him well enough to sort of guess what he would say to recapture his good advice or to have just a bit of friendly sparring.

Right now I am working on several new stories - one a history story about women and the other a new take on Jim and me and our life together for sixty years.

So it does not surprise me to wake up with my hands beneath his jacket hugging him close  - - -  I know that, just like always - he's helping me with the story.

This is heartbreaking, and yet such a strong, affirmative post. It does get easier to deal with as time passes, at least from my experience losing my son--which, I know, is far different from losing your lifemate. At some point I realized the same thing you did--it's up to me to make the happy. No one else can do it for me. We have also learned that it is up to us to make the celebration of our life events, something we've neglected for years. Our birthday's and anniversary usually passed in a blur of work and busyness. We've resolved to change that.

This was hard to read, and yet so beautiful. You are keeping Jim alive in your heart in such a courageous way. Christmas and holidays are a hard time for people who have lost a their mates. You are doing well, and on the way to making 2016 a positive year.