Today I had "fixed engagements" so I put on my coat and came out of my snow-imposed cocoon. Although it is bitter cold the roads were clear, the sun was shining and I felt good to be out and about.

This Monday I had scheduled to tape both Stories in Time with me telling and Stories in Focus with a guest. Kate Dudding is in town and could make time to come out for a show and for a good visit.  Kate and I had a wide ranging and fun conversation about her work as a storyteller and how she makes wonderful stories about people "who have made a difference." I will post the show as soon as I get the video and you can see for yourself - the woman loves what she is doing.

Before I picked Kate up at the Metro I had already been to the t.v. station to tape Stories in Time. Although I selected a story several days ago I switched to a different story and told an impromptu first telling of a story about a 96 year old letter I bought in a second-hand store twenty years ago. At the moment I am working on a new one-hour show set in WWI period. My head is filled with those years and I could not resist talking about this letter from a WWI Army wife.

Later I was so glad that I had told the letter story because with it fresh in my mind I recognized a structure Kate used in one of her stories as a possible answer to a problem I am working on in my WWI story. When we talked about that and other aspects of working on a narrative over lunch I realized again how important it is to have chances for regular conversations with other storytellers where you can "talk shop."

Storytelling like other art forms is inspiration and ideas for the story and perspiration as you work out the craft of the story.

As part of my immersion in the period and in WWI I have been watching films - usually from Netflix. 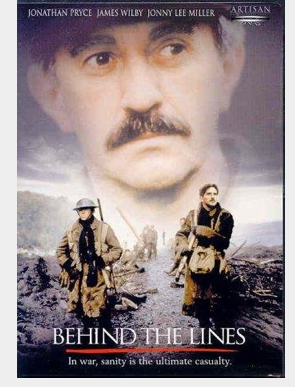 A few days ago a google title search sent me to "Behind the Lines", a British and Canadian 1997 film, about emotionally damaged soldiers sent from the battlefield to an "asylum" in Great Britain.  The story is an adaptation of "Regeneration" a novel by Pat Barker.  Two of the major characters are WWI Britist poets Wilfred Owen and Siegrid Sassoon who were patients there at the same time. It is moving and well-acted as well as informed drama. The story is also another way of understanding the battle with PTSD - when the treatments and therapies were elementary and primarily focused on getting the soldier back to the battle front as quickly as possible.
Posted by ELLOUISESTORY