Pausing to Review and Savor the Stories

As the 2013 Capital Fringe is closing down I want to take a look a this year and my storytelling journey with the Fringe. Looking things over this way helps me to keep on track with my work.

This is my fourth year performing a one-woman show with the Fringe.  I have three not four shows, because last year when I was a recent widow, I chose to repeat Pushing Boundaries, a favorite show of mine rather than dive into developing a new program.

I have been happy to be a part of this year's Fringe with a new solo show even though its had its ups and downs.  When I chose to return with another one-person show I knew there would be special challenges. 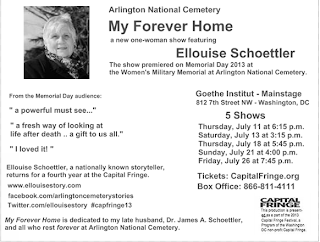 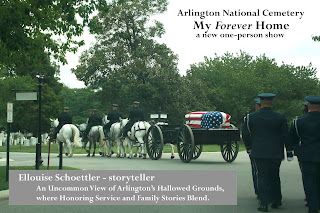 I was back in the same venue, The Goethe Institut, which I really like because the Mainstage is perfect for storytelling. Being familiar with the staff and site was comforting on a year when the personal content was emotional and stressful. For anyone that might not know, August 1 is the one year anniversary of my husband's burial at Arlington National Cemetery. Jim's burial was the impetus for the story and is my heart for it but not the full focus of the story.

The story is drawn from my time at Arlington as a part of my personal journey during this past year of bereavement. Surprisingly it moves from being a widow's tale as it turns into a story with universal reach when it embraces the stories and presence of the recent casualties and their family members who visit them.

Some might not consider that it had a successful run because the audiences were sometimes painfully small but I expected that. The card featured my picture of a caisson with Jim's casket on it - and you were invited to a cemetery. However - the people who came loved the show. Many had a personal connections to Arlington and others just wanted to know more about it.  And - - the thoughtful stellar reviews are the treasure.

I am booking it now and will be telling the story November 20th at the Women's Military Memorial, Arlington National Cemetery as an observance of Veterans' Day.

I really like the long-form one person story. It gives the storyteller a chance to deeply explore a story by creating an aesthetic arc and using it as you model the story. As a visual artist, I have been a collagist for 30 years, assembling bits into a whole. I work the long form story the same way.  A true long form story is not an assembling of a handful of short stories to fill a longer time slot. It is crafted and threaded into a cohesive, smooth whole. There are many challenges and changes during the creative process.

I worked on My Forever Home from the idea in August 2012 through the final telling at the Fringe in this July. Over that time I told the story in workshops, house concerts, and public programs in three states to practice and hone the story. Even so I found myself making tweaking changes during each of the five Fringe performances - changes that refined and polished it for my ears. I love this dynamic aspect of storytelling.

As I look at the run of the Fringe this year I am also reviewing the past two one person shows for what I have learned in the process. 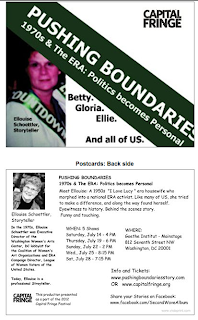 In 2010 my solo fringe show, Pushing Boundaries,  was a grant-funded work based on my one-woman's journey through the 1970s Women's Movement. I explored the story of how I morphed from a traditional housewife to a national activist for the Equal Rights Amendment. I was passionate about the issues of those days and becoming involved in the early 70s changed my life just as the defeat of the  ERA broke my heart.

Through my involvement I met some well-known political figures and entertainment celebrities and incredible men and women who were trying to make a difference. I walked a road I would never have known if I had not been a part of the campaign. Truthfully I enjoyed sifting those memories to craft a story that would be relevant to a wider audience and I loved telling my foot note to women's history.

The story sparked memories from women who were also a part of the campaign and I hope prompted them to share their stories with their families, especially the young women in their world.

I was invited to tell Pushing Boundaries last Spring for the South Carolina League of Women Voters State Meeting. It it was such a pleasure to share it with comrades-at-arms, especially talented and determined women who continue to fight the fight for equal rights for women and for all in their state. This story brings me opportunities to remember the energy and excitement of the 1970s and to touch base with those who still have that same commitment and have passed it to broaden the base. 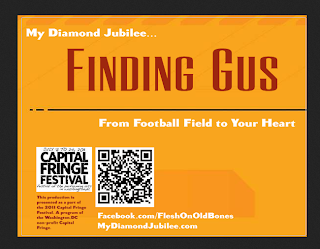 In 2011 I presented a show, Finding Gus, for which I wove together three of my long-time passions: genealogy, family history, and  personal experience  - into a tightly knit story. The heart of the story is finding my mother's father who died when she was eighteen months old. My grandmother's grief was so intense that she silenced his story and he was lost to our family.

Fortunately through genealogy research I discovered his last living sibling alive in South Carolina. She was in her late 80s but mentally sharp with a fabulous memory and wonderful stories of her older brother. He was an early (1904-05) football player for Clemson University and NC State Univ. when it was NC A and M. His story involves the legendary John Heisman.

While I only knew Gus by his name-stone in Elmwood Cemetery in Charlotte, his SC family had kept his memory alive as a family folk-hero.  And, they welcomed me into their fold as Gus' Grand-daughter. 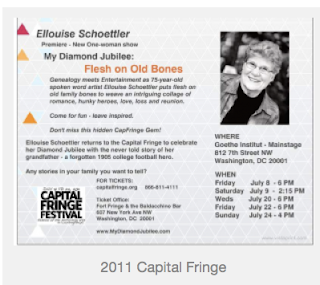 I told Finding Gus at the Anderson Library, Anderson, SC, his home area last April. I will be telling it again in November in Alexandria along with a "Telling Your Family Stories" workshop.


Summary: In looking at the three stories I can see that I have grown as a storyteller through the challenging creative process.

I am already thinking of two possibilities for a new one-woman show for the 2014 Fringe. I am only certain of one thing - - it is going to be FUNNY!