Pride and Prejudice at Round House Theater 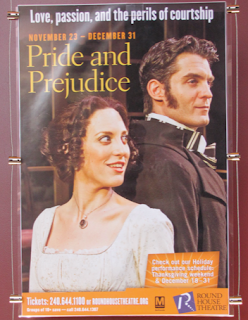 Round House Theater production of Pride and Prejudice.

Sometimes an impulse really turns out well.The reviews have been so outstanding that Jim and I decided to give an afternoon with Elizabeth Bennet and Mr. Darcy to our local family for a holiday treat. It did not disappoint - the reviews led us well - a delightful afternoon.

First: the set was marvelous - a large rotating box - a doll's house - that opened to the different rooms. Action took place in and around it. The movement created a very enjoyable and dynamic environment.

Second: an excellent cast who were obviously enjoying the play and playing it. I doubt anyone would disagree when I say that the A&E version of Jane Austen's Pride and Prejudice sets a gold standard for presenting the story and characters - for me no one can top Colin Firth's Mr. Darcy. That said - I want to credit this cast with a very fine job.

Third: For this production the interpretation was totally true to the book and Jane Austen's words however it chose to draw the focus to the humor in the story. To do that Mrs. Bennet was a larger focus of the action and the actor playing her was perfect in drawing her larger than life. The audience loved her.

Makes me want to re-read the book to follow their train of thought in working out this delicious adaptation.

Another plus was the "talk back" with the cast after the show - good questions from the audience brought forth some interesting answers from the cast. I was particularly interested to learn that the principals, who have done the play together before, often change some of their scenes - i. e. the proposal-
as a way to keep their performances fresh and spontaneous.

An afternoon at the theater - so satisfying and invigorating to be drawn into another world. I walked out of the theater wanting to come back to see it again. Hmmmm, who knows.....