Winding up the 2011 Capital Fringe 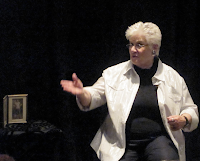 During the 2011 Capital Fringe I had five performances for Finding Gus - my new one woman show drawn from my family history.

Gus Keasler is my grandfather, a mythical figure, who died when my mother was 15 months old. The story is a quest which blends genealogy and storytelling. Storyteller Nancy Donoval worked with me to shape the story.

The day after the Fringe closed - when I was really tired. I wrote this to a friend:

"Glad the Fringe is done actually - the heat, and other stuff. Small audiences were really hard - but -- they gave me the freedom to stay in the process and keep working on the story until Sunday - when I felt like I had tweaked it into its best form. I liked using the teeny tiny touches of theater - the glasses and table set-up.Just enough to help define the space - and separate two of the characters. Could tell without them - but loved trying this as "something new"
Jim and I saw 10 other shows. I stuck with all the one-person (male and female) shows. Made it a seminar in the form since  I seem to be most interested in the long form story right now. IT was too good an opportunity to pass up - and I learned quite a bit -"

Now, a week later I can be a bit more reflective:

Finding Gus is a story that is a bit off as a usual fringe show. I knew using it would be a challenge ... And it was. I faced smallish audiences which was difficult but turned out to be an unexpected advantage in that I felt freer to experiment with altering the show.

I was pleased with the shape of the story when Fringe opened but as happens ..telling it brought insights for how the story could be sharpened and improved. The story changed each time I told it..and by the end of the run Finding Gus was completely tweaked. I added a couple of "theater" touches and changed the opening and the ending. For me, this year the fringe run was total process.

There was angst over the small audiences. There was the artisitic freedom to experiment. There were  benefits. People who mattered to me saw the show: family, storytellers, friends and reviewers. They laughed and cried as they heard the story. Wow. So I know the story was worthy and I am telling it well.  Four wonderful reviews such as THIS re-enforced my belief in the story and in myself

The Fringe environment abounds with challenges and opportunities. Meeting new people is obvious. Along with the chance to see many varied performances .. some traditional, some experimental in a short period of time. Unlike a storytelling festival the shows are primarily theater-based. During this fringe, since I am focusing on the one-person long form story, Jim and I saw 10 one person shows -- ranging from very theatrically staged to humorous storytelling. I used the Fringe as an intense master-class --- and I learned a lot.

Fringing is also hard work. Artists are responsible for their own marketing and advertising. This is doubly difficult if you are coming in from out of town. One of the most successsful out of town marketing efforts I saw this year was for "Alice "... A  professionally staged theatrical one-person show from Florida (I believe). The audiences who filled a large theater space did not look like usual fringe patrons. The "Alice" folks did an impressive job of contacting and attracting an older segment of local theater goers  - people who would be interested in a show about President Theodore Roosevelt's daughter, Alice Roosevelt Longworth.

Times of performances are also a major factor. I ended up with three 6PM slots on work-days, another at 2:15 PM on Saturday and 4 PM on  Sunday. The saturday and sunday were fine but those three 6 o'clocks were killers - for someone like me who was marketing to a local suburban audience with a show that would appeal to an older audience. Hindsight is a good teacher . I cannot imagine I was the only show pinched by timing. Once I gave up the idea of getting larger groups in - I began to see how it freed me in developing the show - even if that did make the Fringe an expensive rehersal hall.

The heat in DC is July is a killer and this year it bore down with a venegeance. Fortunately I was assigned to an air-conditioned venue. Jim and I attended one show that was in a hot box and if Kimleigh Smith's show T O T A L L Y  had not been the exciting, fabulous show it is - we would have melted - sitting there for an hour. Fortunately the other one-person shows I wanted to see were in cool spots.

In summing up:
I am glad I was part of the Fringe this year...built on what I learned last year and will be reviewing this year's experiences as I prepare to fringe again.
Posted by ELLOUISESTORY

An honest, interesting post, Ellouise. I do not think the DC Fringe is for me--logistics of time and timing make it not a venue I am attracted to. But your evaluation of the process and the experience is what all of us who perform want to know--the real truth. I bet you will be there again with bells on, as my father would say. I hope you submit Gus for the NSN Conference Fringe.

I admire your commitment.
I'm lazier. Many stories worth hearing are my heritage but the marketing is beyond me. I tell them to my kids and others' kids in the hopes that somehow they'll survive. So much is lost without someone as committed as you. Bless you and Jim.

I went to the Cap Fringe a few years ago and had a similar experience, Ellouise. Coming from out of town is hard for any fringer. Sounds like you had some particularly tough time slots, too. Congrats on the review- really nice one!

I always tell storytellers that a Fringe is by no means a way to make money, and the first time out you will definitely lose money. But you experience is a reminder that even experienced Fringe artists need marketing muscle AND can still get a lousy draw of time slots.

Congratulations on getting through another Fringe!