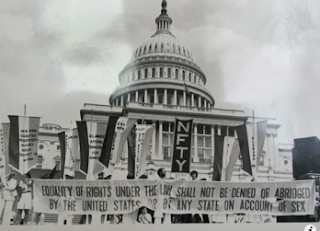 I was one of them - marching with a group under the banner of the Coalition of Women's Arts Organizations.
It was as hot that day as it is today in Washington - humid and blistering hot - but that did not dampen anyone's spirits.

As a marcher you were part of a sea of white - women of all ages, sizes and colors - even some in wheelchairs and others with their children.
Asking Congress to grant an extension for the campaign. Give us a little more time to persuade three more states to vote for the Amendment.

Do you remember that. We needed 38 states; thirty-five had ratified -
Women asked for 6 years - they knew the remaining 10 unratified states were the toughest, the most conservative. It would be an uphill battle to ratify three states from that line-up.

In their unfathomable wisdom, Congress granted 3 years - - the campaign was extended until June 30, 1982.

On a personal note: if I could have forseen my future I would have thanked all those women that day - thanked them for marching so that I could get a job.

July 9 - in three days - - I will be at the Capital Fringe - not too far from the Mall in Washington, DC, telling my story of that time.

Telling of a time when I was an eyewitness to history.

If you are in or near the DC area I hope you will come to hear the story.
Posted by ELLOUISESTORY