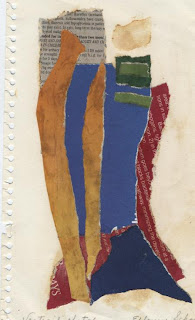 Found this old sketch-book collage
I like it.
Tells me where I was - then.

I would not make it that way today
and
isn't that worth knowing
about a lot of things.

We signed up for the annual retreat with our prayer group
Two days in silent prayer in a lovely environment
two blocks from the Washington Catholic Shrine.

Wouldn't you know?
It was the same week-end as the opening of Telling Moments Storytelling Theater.
I had Board responsibilities - making the punch and introducing Jon Spelman, star of the show.

We left the silence in time to go home, dress fancy, set up the food -
Planning to go back to the Retreat House after the show
Sister gave us a key so we could get in after the front door was locked.

I was felled by a really bitching stomach attach - pain, pain, pain.
Called the doctor
Go to the emergency room.

OK- after
the stories are done
and the punch is drunk
and the kitchen is cleaned
and stuff loaded in the car.

Jim and others stepped in to help speed our get-away.

Fortunately the ER was not too busy
But it was freezing cold
Don't you love blankets from the warmer.
We were home by 3 AM
I evaded being admitted
They will try new antibiotics -
And see your doctor on Monday.

That is the good news.
Lets hope the new meds work.
Posted by ELLOUISESTORY