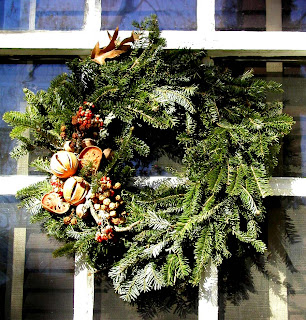 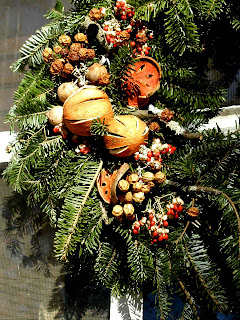 This wreath is citrus delight. Wreath and detail to show its abundamce: dried oranges and orange slices, dried berries, walnuts, and red winterberries.

Why wreaths? I wanted to find out more so went to Wikipedia.
Wreaths are usually made from evergreens as a symbol for the strength of life, with these plants overcoming even the harshest winters. Such wreaths often use Bay Laurel (Laurus nobilis) and can be categorized as laurel wreaths. Other components of a wreath can be pine, holly or yew, symbolizing immortality, and cedar, symbolizing strength and healing. The Greek god Apollo is often associated with wreaths, and was a god of life and health. This inspired the Greek to use the symbol as crowns of victory at the Pythian Games, a forerunner to today's Olympic Games. The circularity of wreaths can be used to symbolize eternity or immortality (see Crown of Immortality).
In Northern Europe, wreaths made of branches of conifer trees (especially firs) are commonly used as a symbol of remembrance of the deceased. For that purpose, such wreaths are often left at graves at burial (and sometimes, significant anniversaries thereof), or in cases of burial-at-sea, left to float at the sea. ( copied from Wikipedia ). Read HERE for more about the history and symbolism associated with wreaths.

Whew that's a lot of information. 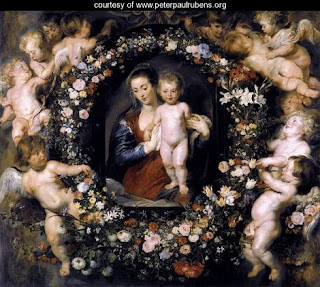