Jim and I drove back from North Carolina today. We started out at 6:30 am in the cold dark entering Hwy 85 to join a herd of trucks already galloping up the road.

We watched as the big orange ball of a sun came up. Seeing it, I thought of a story I have been telling lately, The Sun Catcher. In that story a hunter goes to that place where the sky meets the earth, puts down a net and catches the sun. I saw that it does look like the sky is touching the earth and the sun appears so large and close that you can imagine that you could touch the sun. I want to hold that image in my mind's eye so that from now on when I tell the story I will really understand and see how those people long ago could draw that image.

About 11 o'clock my phone beeped letting me know that I was receiving a weather alert text message for the Maryland area - a warning that there was an unexpected snow squall ahead. Sure enough, as we reached Fredericksburg the skies darkened, the winds picked up and snow began to sweep the road. We rode into a white haze.
We were in the squall about an hour. Sometimes the snow fell heavily, other times more lightly. Winds changed suddenly swerving the car on the road.

When we approached the exits for the Washington Beltway, 495,just as suddenly as we had driven into it, we rode through it and into sunlight and bright blue skies. We drove toward home as though there had been no storm. We might have imagined it - except for the white remnants on the hood of our car.

Isn't that like life? Sometimes you have a warning when things are changing; sometimes not. All the same you have to ride through the storm. 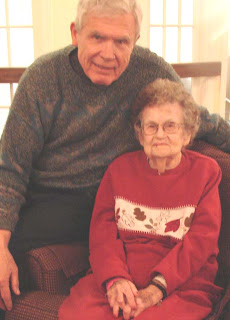 This week-end my siblings and I received an alert. Our 92 year old mother was in the hospital for a few days. She weathered the assault on her body this time but its clear there are more squalls ahead. And we have to ride through them with Mama.
Posted by ELLOUISESTORY

92 years is a long time and a good life, Ellouise. You're blessed to have had her so long. We're never ready to let go, are we? Your analogy of the snow and your mother's illness is beautiful. The road ahead may be rough and you may be blinded by events as they come too fast, but your storytelling heart will find the truth and beauty in each as it happens. Keep a stout heart, Ellouise.