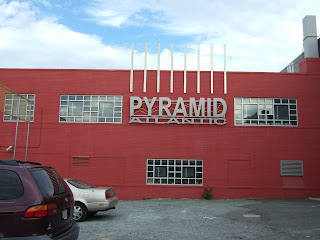 Teaching at Pyramid Atlantic, a paper-making and book making studio in Silver Spring, MD, today. Helen Frederick and I introduced a new one-day workshop, Close the Book; Tell the Story. Eight exceptional women enrolled for the day-long workshop and it was a terrific day of stories and book-making.

We had asked each person to bring a significant item as a story prompt to use to introduce themselves to the class with a personal story. And they did. Wow! The women were generous in sharing stories from their life, from the betrayal by a friend when her car was stolen, a touching memory of a grandmother, talismans that represented lost parents and a special childhood object with its story.

After the sharing the group commented on the stories and their reactions to them. One woman said, "I am floored by the level of intimacy we have as a group - just through these stories. We don't know anything about each other and yet we know each other."

Right there they were getting to the power of story! this is why I particularly love and work with personal stories.

TIP: As we talked about story I told them the tip I learned from storyteller, Donald Davis: "Don't memorize a story. Know the six rocks you need to step on to get from one side to the other. The rest is like the water that keeps moving around the rocks."


The women were eager to work. 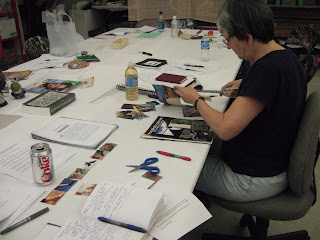 Helen led discussion sessions on the book-making during the day - as only she can. Helen Frederick is a gifted teacher who can lead people to new levels of visual appreciation and accomplishment. I have known and worked with her for more than 20 years and it is a joy to be with her and she always teaches me something - she just can't hep it - it slips out of her.


On a personal note: Being in the Pyramid stuido brings out the "trash picker" in me.
These fresh scraps of hand-made painted paper were too luscious to leave in a bin so I resued them. When I told Helen I thought I would use them for collage, she said, "with my blessing. Those are cuttings from my work." Another level of collaboration. 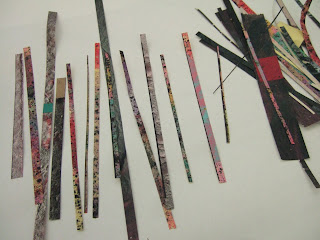