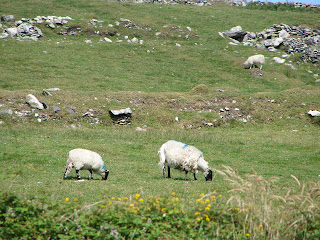 Nice to be settling in at home after almost two weeks in California. Loved being with Robin and her family and seeing everybody at the family reunion but - there is nothing like the familiarity of your own bed.

So why is it we move around so much. What is this restlessness?

As I was unpacking this afternoon I remembered that at this time last year I was unpacking in Ireland. That was a strange trip.
We traveled with an Elderhostel group and by the time we got home we were hostile elders. Since then its been hard for me to process the trip and write about it. Not that its necessary to write about trips; its just that when I do I remember it.

First off, I have to say that by the third day of the trip I was felled by a severe attack of diverticulitis. I could hardly walk without excruciating pain in my back. I was miserable. And irritable. Making me a really delightful traveling companion for Jim.

But more than that - we both felt confined by long daily bus rides with our American group which closed us off from meeting or interacting with locals. And, we had really looked forward to spending time in a country where we had a common language and could meet people. And, hear stories.

We heard stories all right - from our group companions - because we shared three meals a day with them and all those endless hours in the bus. The people were nice. Perhaps they felt as trapped as we did. Its just that we were looking for stories from Irish locals - not our own country follk. And, the leader, an articulate and very smart university professor, was committed to his syllabus and talked it at us endlessly all day, every day. Leaving little room for spontaneity or serrendipitous discovery. I could not believe that we were riding right by a replica of an immigrant ship that brought our relatives to America and that we were not going to stop. When a group of us prevailed in our request we had a ten minute peek at this ship - because we would be late for the next stop on the agenda - a mock-up village of early Ireland.

Jim and I took a bye on an afternoon at the Waterford Crystal factory. Instead we thoroughly enjoyed a lesiurely tour of the Waterford City Museum - not only was it rich in the history of the area but it was set in a rennovated waterfront factory which had been redone in a very creative use of the space- creating effective museum exhibit areas and preserving the original brick structure throughout the interior. And we met a few folks in the museum who made the time doubly worthwhile.

When we reached Dublin Jim and I bolted the group for a few days. The highlight of our entire two week Irish excursion was the Mary Gibbons day trip to New Grange, Tara and several other sites near Dublin. After reading Ireland by Frank DeLaney we could not miss New Grange - and it was not part of the Elderhostel agenda. Pity. Well - we did see the Book of Kells, and had two nights at the theater with the group. But most of all we loved just wandering Dublin city on our own.

What have I learned? To read the materials carefully epecially the daily agendas and not to assume anything.

This trip was exactly as it was described in the brochure and on the website.

It is not the fault of Elderhostel that their plan did not fit my expectations. I made those expectations up all by myself.

Would I sign on for another Elderhostel? I doubt it - but I might - if I read the descriptions carefully and decided it was the trip for me.
Posted by ELLOUISESTORY