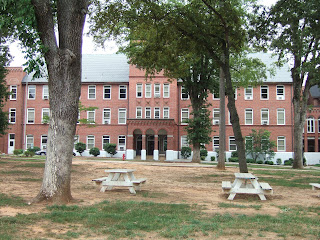 I stopped the car and we looked at the place. Jim knew it. I tried to explain it to Karen but it was hot and she wanted to move on. I clicked the picture. That's how it is, isn't it?

You can't explain your memories to other people - when they have no connection to them and none of their own about the place.

TIP: Donald Davis teaches that you have to make people care about the folks in the story first. Show what normal was; then turn the applecart upside down.

I was six year old when my Daddy went to war, World War II. I had started the first grade. After he left things stayed pretty much the same for we three girls. it was Mama's life that was tipped on end. She was a single working mother - before they called it that. We moved from the large single family rental house to an apartment in a twelve famliy apartment house. Smaller quarters were less expensive and easier to take care of. And living around all those people was fun for a kid. People to talk to and things to see. I started and finished the second grade. Then, several months after school was out - polio struck. An epidemic. Polio roamed the streets looking for the children. People were scared. Children under 15 were restrcted from going to public places. Mama was terrified. This I think was a final straw for her - with daddy gone, working and all. She made arrangements for my sister Lynda (5) and I to live at Sacred Heart for the summer.

It was a good plan actually. Get us out of the city and into the country - away from the threat of polio. The Sisters agreed we could come. All the student were gone for the summer - just Lynda and me and Patti P and her brother. They were there because of a divorce. Four kids unexpectedly separated from our homes and parents.

But kids adapt. Sister Loyola, a wonderful woman I came to love, took charge of us every day. She told us stories and taught us religion as we sat outside in a gazebo stringing beans or shelling peas. It was quiet, peaceful, It was a large farm with chickens and cows - fresh eggs and just milked milk. A new world. 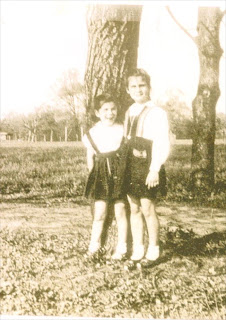 Mama came to visit on Sundays. She did not tell us until months later that our cousin Janice, a cute freckle faced red-head, was the first child in Charlotte to die from polio.

When school started in September Lynda and I stayed for the school year. We lived at the beach in my grandparents house the next summer and then we returned to sacred Heart.

The war ended and Daddy came home. He came home in November. We went home for Christmas and we did not go back to Sacred Heart - except to pack up out clothes.


I cried bitterly at leaving.

Sacred Heart had beome my home.
Posted by ELLOUISESTORY