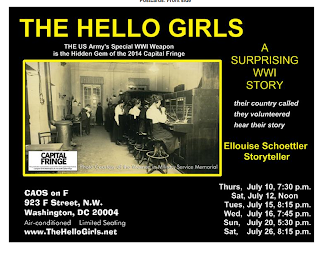 There is always a back-story for a new story.

As you hear from me all the time, my head is in the days of World War One because I am preparing my new show, The Hello Girls, for the DC Capital Fringe. However my interest in WWI actually started accidentally 20 years ago when I bought a box of old letters at the Dilworth Book Store in my home town, Charlotte, NC.

One of those letters was from Grace Hotchkiss, young wife of an Oregon Captain who had been stationed at Camp Greene, a training base outside of Charlotte. I have used Grace's letter as part of my stories about letters since I bought it.

I have wondered about her. I also have some letters from her husband written from over-seas - but its Grace's letter that haunted me. Last year when I was invited to tell stories at the Hagood Mill Storyelling Festival in South Carolina I chose to fly into Charlotte first and spend some time at the Carolina Room of the Public Library. Although Grace was not on mind as part of my search when I mentioned her to a very helpful librarian she found some unexpected information about Grace - we have a totally unexpected connection. Often on Stories in Time I tape stories which talk about developing stories. So I taped this new story of Grace's letter.