Story is the Family Connector 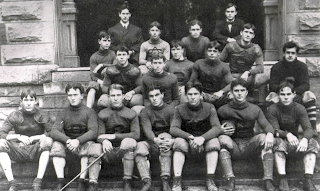 
This year I discovered my grand-father, Gus Keasler. I tell his story in
Finding Gus . He was a missing link in our family. Finding him answered questions and it opened doors.

But perhaps most important knowing Gus provides a wonderful hook to connect his time and our family today.

This year for the first time I am following the Clemson Football team and rooting for them. Proud and happy for them over their strong season - because I feel connected to them. I know that Gus is there with them when they play their home games - he is remembered on a brick on the terrace where the players enter the field.
Gus Keasler, 1904, 1905 - - -

Have you ever noticed that at half-time on TV Clemson shows pictures of their historic teams? I can't help but feel it as a "southern" thing. And, I am grateful for it. Its that same impulse that brought me to storytelling and holds me there - the need to tell the stories of my family and to connect the threads of the past to today.

For instance: our grandson is a Senior in a California High School. He plays on a football team that
everyone thought would place last in their city. But never under-estimate the under-dogs, right?
These guys have proved themselves to be the "little team that could." They finished first in their city league - undefeated - and have won two of the bigger State play-off games against much stronger teams. Next week they tackle an even tougher challenge. Its like a chapter from the popular TV show, Friday Night Lights.

I look at our Dan wearing his sleek blue and white well-padded uniform - and I think of Gus. It makes me happy to tell Dan about his great, great grandfather - a South Carolina farm boy who was recruited to Clemson by the fabled John Heisman 107 years ago when football was in its infancy. Just as Gus lives in his story - - - I believe he lives in Dan.

You see  - - I believe that if you know the stories and connect them - they will both live on and on and on - adding new pieces as time goes on.
Posted by ELLOUISESTORY