Winding up Jonesborough with a quilt and a basket-maker

A Bit of History 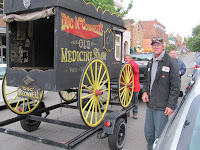 Doc McConnell's Medicine Show Wagon was given to the International Storytelling Center this year. Jim snapped this picture Monday morning as it was being moved to storage until next October. Now it is a precious relic. I am glad I had a chance to see it Alive - when people were crowded around fascinated by the late Doc McConnell and his stories. 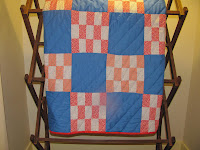 Have you noticed the quilt in the hall at the International Storytelling Center? This year I heard a bit of "back-story" about it.

Someone told us that early-on at the end of the festival each year Jimmy Neil Smith's (he's the festival founder) grandmother used the left-over cloth swatches to make a quilt which was raffled off at the next festival. When I passed this quilt which is displayed in the hall at the Center - I stopped and looked at it carefully. Could those smaller patches be swatches? There is no signage telling the story so I asked a woman working in the shop and she asked someone else and the answer is YES! The quilt was probably the last quilt his grandmother made - in the 1980s - it is from Mr. Smith's personal collection. It is simple and lovely and means much more now that I know the story. 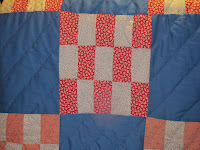 For those who might not know - your "ticket" to enter the festival tents is a swatch of fabric - or swatches - as the fabric is different for a full-week-end, or a one day, or a two day ticket.

Many people who attend frequently wear all their patches - pinned on hats, sewn on jackets or otherwise displayed. They walk around in their history with the Festival. 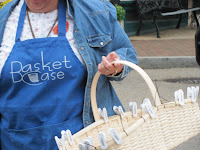 Back to the fire. (I have written several times about a Main Street fire in Jonesborough last Sunday. It was not huge, took no lives, and was quickly settled - but it gathered a crowd and two fire engines.)
This woman scurried out of the building next door to the fire holding a half-done basket she was weaving. 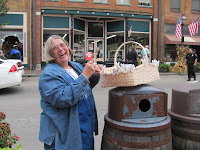 "No one told me about the fire." She propped her basked on a large trash can near April and me.
When we admired her apron she burst out laughing. "my daughter gave it to me - its true." She had a wonderful hearty laugh and was a lot of fun to talk to.

Watching firemen at work takes a bit of time. April and I stayed because we were snapping pictures. Diane (that's the basket-maker's name) was getting a bit frustrated because she needed to finish her basket. Finally she sat down on a bench near-by and began working on it. 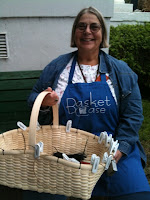 After a bit April and I moved over to continue our three-way conversation.
I don't remember how it came up but Diane began telling us about her cars and her passion for drag-racing. Now that was a surprise and it took my full attention. She showed us her car - an Oldsmobile 1970s Ralley E - her eyes lit up as she talked about it - and about the thrill of feeling rocks spewing out under your wheels as you pull off for a race. "You know what I mean!" She looked at me. Truly I don't but I could see how thrilling it was for her by the way she talked about it and told the stories of her races. 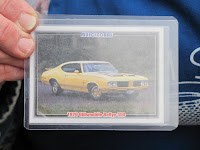 "Are these what they call Muscle Cars."

"Diane, do you tell these stories?"

"Oh, no, that's not right. You are a natural storyteller. When you talk about your cars its pure story. I hope you will talk to somebody about them. I'd like to hear you telling them!"

And wouldn't she be a surprise - a basket-making, drag-racing grandma????? and I hope she wears her apron!

I said it before - so why not again - there are surprises and stories everywhere you turn in Jonesborough, TN - especially at Festival Time.
Posted by ELLOUISESTORY