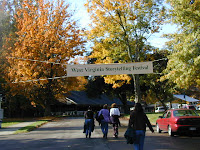 Stumbled across these pictures - and the many memories.

First storytelling festival I ever attended.
Told ghost stories for the first time at the Open Mic in the barn. Introduced family ghost stories their that I still love ane tell.

11 year old Juliana told her first story at the Open Mic - she is now a Theater-Drama graduate taking steps into her acting career.

For five years we attended as a "family" - enjoying a week-end of stories surrounded by the beautiful colored foliage of the Fall.

Met wonderful storytellers there - people I sometimes tell with - Granny Sue being one very special connection from that time.

I still feel a special connection to the West Virginia Storytelling Festival. 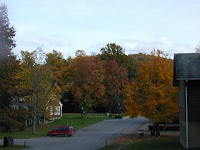 We do also have some family conections to West Virginia.

Our many greats grandfather - on my mother's side, North Carolina pioneer, Tunis Hood was born in West Virginia. His father John Hoed, a surveyor from the Dutch colony of New Amsterdam, came to West Va (before it was West Va) with a surveying party in the days of Indian Raids and was killed in one near Fort Frederick. After his death Tunis and other siblings moved on to Virginia and then to North Carolina. I keep meaning to go up to the Berkley Springs area and do more tracking to find out their stories - - That's the fun of genealogy - detective work and stories.
Posted by ELLOUISESTORY