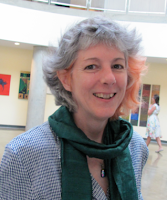 When Claudia came over yesterday our conversation roved the world. At one point, like millions of other people, we talked about "where we were on September 11." as part of the remembering.

At the time I was a member of Gallery 10. Jim and I were in Italy with a group of Gallery 10 artists who were were putting up group exhibitions of our work in five cities in Italy. After spending four days in Prato - a city near Florence - mounting two wonderful shows we had traveled on to Venice for a show at Gallery Venezia Viva. A week in Venice during the Venice Biennialle International Exhibition was magic. Pure magic. We were all on a lovely cloud.

On September 8 Jim and I took a train to Montecatini to participate with a smaller number of our group in the final two exhibitions - one at the Accademia del Arte in Montecatini and the other at the Marino Marini Museum in a near-by city. Claudia remained in Venice for a few more days before she traveled on to Berlin.

"I was in Venice with Romeo and Pat on September 11 - at their apartment. I was out all day and did not know anything about the bombing until I came back for supper. Pat and Romeo were watching television - they told me what had happened. I was numbed. We stayed in following the TV coverage from New York. Their neighbors who knew Pat and Romeo were Americans brought over bouquets of gorgeous flowers."

In Montecatini the day was perfect - bright blue sky, sunny and warm. Jim and I took the funicular to the top of the mountain to the charming old town for the view of the surrounding valley. We arrived back at the hotel for lunch and a nap. Around three we walked down the wide carpeted stairs to the lobby. When the concierge - a jolly friendly man - saw us he called out and gestured frantically for us to follow him to a large sun-room. It seemed strange behavior but we did as he wanted. Chairs were set in rows for the Elderhostel class and they were facing a large TV set at the front of the room. People were sitting - frozen - riveted toward the screen. I saw tall buildings on the screen and an announcer's voice was loud, nearly hysterical - a plane was flying directly toward the building. My first thought was that they were watching a "Bruce Willis" movie. The plane crashed into the building - I began to make out the words the announcer was saying, "the second tower, the second plane."Jim and I looked at each other disbelieving what we were hearing and seeing. We sat with the other Americans watching the terrorist attack on the NYC Twin Towers.

After a while Jim and I went back upstairs. I stopped at the landing where there were two computers and typed in my email - our daughter Karen in Washington, DC had understood that's what we would do as soon as we knew. Her email was waiting. It was quick - to the point. 'We are OK. Jimmy (our son) was not at the Pentagon today. Trip,(my cousin -a naval officer assigned to the Pentagon Navy Office - where the plane struck) was sick and had not gone to work today - he was OK.

Jim and I continued to watch CNN in our room. Until we could not watch any longer. We felt so helpless and so far from home. We decided to go to the near-by Catholic Church to do the only thing we could do - PRAY. Many other people had the same impulse. We stayed for the evening Mass. Many Americans were in the pews.

That evening in the hotel dining room at the end of dinner - an American man stood up and asked everyone to join him in singing "God Bless America" The sound of chairs scraping the wood floors filled the room as everyone present stood - Americans and Europeans. Tears streaked my cheeks as we all sang.

(There is more to the story. Jim and I were supposed to join a tour group in Nice, France in two days. We took the train to Nice. The rest of our group was coming from NYC and Dulles. The US airports closed. Our traveling companions never arrived. Because we could not fly home and dared not even try to change our airline tickets - Jim and I rented a car and wandered our itinerary through Provence for two weeks until our plane was to leave from Marseilles. It was a strange trip - to say the very least.)
Posted by ELLOUISESTORY