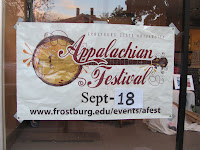 Jim and I are in Frostburg, MD tonight where I will tell stories at the Appalachian Festival tomorrow.

Its been a great day - a lovely day for the two and a half hour drive from Chevy Chase. We have played all day - with easy going sightseeing in Cumberland, Maryland where we had a deli lunch a the historic train station and watched the steam train arrive back from an excursion at 3 PM. What a lovely sight - white steam against the blue sky. (I will post a picture later)


For supper we tried the Saturday Fish-Fry dinner at St. Michael and the Archangels Church across the street from the Plaza Theater downtown. The red brick church is more than 150 years old. The dinner was set-up in the church basement - which was crowded with folks of all ages - sitting at long tables, eating and talking. 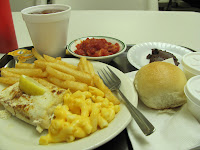 Just look at my tray. I was over-whelmed by the amount of food. All tasted good. The fish was fine, macaroni and cheese better than I expected but my favorite was the scalloped tomatoes. Loved them. The meal was topped off with home baked cakes. I selected the Brownie and I tell you I was not disappointed.

We sat with a young couple, an Air Force recruiter, a darling twosome - and we had a lovely chat. It was all much better than another meal in a resturant. 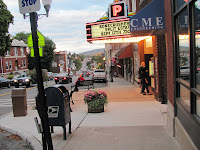 The church is right across the street from the Palace Theater - a restored vintage movie house - where we were headed for the Film Festival. Bone Crusher was the headline film - a touching documentary of the loving relationship between a VA father and son, both coal miners. The film-maker really knows how to tell a story and I will never forget the scenes filmed in the dark tunnels of the coal mine -

All in all a FINE DAY.
Posted by ELLOUISESTORY