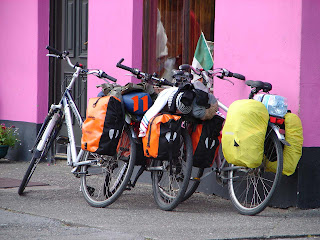 Waking up in my own bed is great except that Jim is not beside me. He is still at GW. I had to come home last night because I have to tape my TV show this morning at 9 am. After that, I am expecting to bring him home - so they say. I hope so! My alarm did not go off - or I did not hear it so I am really grateful the aide was waking Jim at 6 am to take his Vital Signs - because he called me to make sure I was UP. Appreciate the team work.

Speaking of team work. TAR HEELS won last night! Michigan could not get in to stop them. Those guys in blue and white were hot. They came to WIN and they did. I missed watching it with Jim - yelling out into the room alone is like the tree falling in the woods - no one to hear it. At one point I called Jim - I knew he was watching in Room 423 - also alone - and we could cheer together.

TELEVISION SHOW:
When I taped my show this morning Melissa, my director told me the station was expanding my time from one time slot a week to THREE. It's a repeat, yes but at a variety of time, 6:15 pm, 7:45 and 9 PM something. Cool.

I will talk more about the show and the new virtual set system later. Now I have to work ono stories for tomorrow. Telling at Fort Detrick, MD.