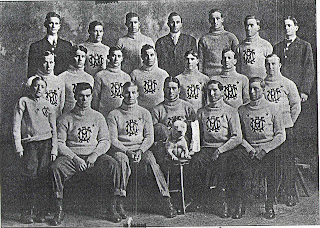 (Gus is the guy in the middle of the second row.)

After Gus lost his athletic scholarship at Clemson he transferred to North Carolina A & M College in Raleigh, NC - now NC State University. Again he played football and was an outstanding player. A write up of the 1910 A&M vs Kentucky game gives a play by play of Keasler's contributions to what they called a "spectacular game."

After Gus graduated he moved to Charlotte where he was a manager at the Buckeye Cotton Oil Manufacturing Company. I don't now how he met Ellie Hall, but when they did it must have been love at first sight. They courted and then married in 1914.

Sometime between 1915 and 1917 they moved to Macon, GA when Gus was promoted in the Buckeye Company. Chritine Keasler came to Charlotte and lived with Alice Hall Granny's moved while she was attending nursing school.

In 1917 Gus became ill suddenly. Granny never left his side, day or night, for the ten days he was in the hospital. Everyone was shocked when Gus died. He was 32. Granny was devastated.

Her sister, Cora,had come to Macon to take care of Mama and comfort Granny while Gus was in the hospital. Her brother Fred came down to help with arrangements.

Granny wanted to move back to Charotte, near her family, and she wanted Gus close-by so she elected to bring him back to Charlotte and buried him at Elmwood Cemetary.

When the train carrying Granny, Mama and Gus's casket came through Anderson, SC the Keasler family came to the station to pay their respects. His father, John Henry boarded the train and accompanied Granny and his son to Charlotte.

I heard this story for the first time about ten years ago when I went to Sandy Springs to meet Annie Laura Keasler Moore, Gus's younger half sister. After Gus'mother, Narcissus Howard, died, John Henry married again and they had two children. Annie was the youngest. When I met her she was in her late eighties, a bright, interesting woman.

Annie welcomed Jim and me with open arms. During lunch she reached across the table and squeezed my hand, "Ellouise, we have the same blood." And I truly felt the truth of my name, Ellouise Keasler Diggle - now Schoettler. That was the first time Gus was real for me.

Until the end of her life, Gus was " my own dear precious love." to Granny.
Posted by ELLOUISESTORY