We all have a "back story" and part of mine is what my new story project will focus on. And, I feel so fortunate there are a number of things happening that play right into helping me reconnect with another time.

This year there are several major "review" exhibitions of the art work of famous feminist women artists from the 1970s. WACK first opened in Los Angeles and now is the main show at the National Museum of Women in the Arts. Next month, Claiming Space, the show of feminist art that Mary Garrard and Norma Broude have curated opens at the Katzen Art Gallery at American Washington, DC. Seeing these works will be like "old home week for me" - I saw them when they were first shown, often in spaces not nearly so toney as the Katzen Center and the Women's Museum. Now, 30 plus years later, this cream rises to the top.

Next week I am going on a private group tour of WACK which will be led by feminist art historian and my friend, Jospehine Withers. There is no one I would rather hear talk about these works and place them in personal and historical context. Josephine is leading this tour for Veteran Feminists of America on the day of their reception in Washington. They are honoring the women in the Washington Area, "Feminists Who Changed America. 1963 - 1975" who are listed in a book of the same title. I am pleased and delighted my name is among those listed and I will be attenting the reception at the Sewall-Belmont House and Museum in the evening.

By gathering at the Sewall Belmont House this group reconnects with the women of the earlier Suffrage Movement. This lovely historic home within walking distance of the Supreme Court and the Capitol was once the home of pioneering sufragette, Alice Paul. I have been there a number of times and even organized a meeting held here when I was working as ERA Campaign Director for the National League of Women Voters of the US.

Josephine Withers was one of four women who founded the Washington Women's Arts Center in the early 1970s. They created a space where women artists could carve out a career during a time when the art world was male dominated and opportunites for women were not equal. The Center was not just about hanging your art work or experimenting with new forms and visions; it was a training ground, a place to learn the business skills so important for establishing a career in the arts.

It was also a professional and supportive community for women artists in the Washtington area. 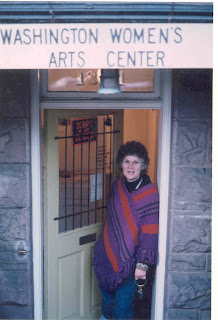 The Washington Women's Arts Center will have to be the second stop on my journey. I became involved in th Center in 1974 and it became the central focus of life as an artist. Notice, I have the keys.

(personal note: I loved wearing that crocheted poncho that Mama made for me. During the 1970s she was in her crochet-phase. She made afghans for everyone in her family - I guess that would be about 25. When she moved on to ponchos she asked me what colors I wanted. I told her red and purple. She made it work - because she added the repeating narrow green stripe. I could see where my "color sense" came from. <em>I wore it so often that there are stacks of photographs of me that look like they were all taken the same year
Posted by ELLOUISESTORY